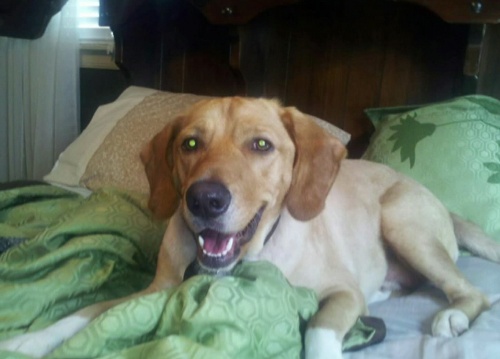 Otis was home alone when a fire broke out. The dog was trapped inside with no way to get out when a group of neighbors risked their lives to save him.

Lori Price was the first to spot the fire and without thinking she ran over to see if anyone needed help. No one was home, but Price heard a dog barking. At the same time Blayne Kramer was backing out of his driveway when he spotted the fire. Price informed him she heard a dog barking inside.

“I’m getting this dog out of this house. I don’t care what it takes,” said Kramer.

Kramer ran to get some help and found it in contractor Eric Jesch, who was laying tile in a nearby home. Both men tried to break into the home, Kramer through a window and Jesch through the front door. Jesch managed to kick down the front door.

There they found Otis barely breathing curled up in the entrance. Kramer crawled into the smoky home and carried Otis out.

“He was covered with soot. His tongue was black. We just shoveled, just put snow up into his mouth trying to get him some moisture,” said Price.

By the time firefighters arrived Otis’ tongue was back to pink and he was standing on his own. He was taken to the vet to be checked over.

Although firefighters commend Kramer and Jesch for their bravery they put themselves in serious danger. Kramer has no regrets and says he would risk his life again to save Otis.