Neighbors Save Dog Locked Outdoors on 16th Floor of Building 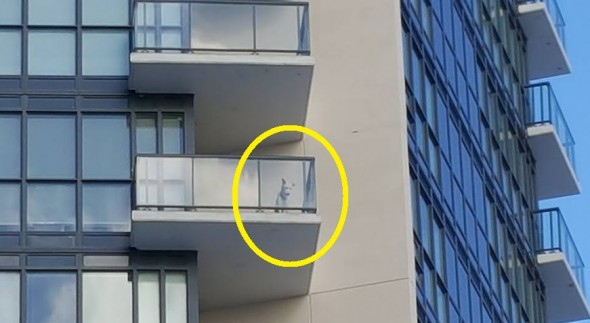 In Toronto, Canada at the Liberty Village Condos, someone left their dog locked out of their apartment on the 16th floor of their building.  It was really cold outside, and the dog was clearly suffering, as neighbors said you could hear his howling from blocks away.  The dog was brought indoors when the police finally arrived, but the dog is still with this person or people at this time.

Neighbors and residents said the dog could be seen on the 16th floor balcony of an apartment.  It was very cold outside, and witnesses said that the dog was trying frantically to get back into the apartment.  Apparently, the dog’s human was not in the apartment at the time, but decided that the balcony was going to be an OK place to keep the dog, despite the frigid temperatures.

Someone put pictures and information about the dog on social media website.  That set off a domino effect that lead to tons of posts all over social media outlets about what was going on.  It was only a matter of time before someone called the police in.

They did show up to the apartment, and finally did get a hold of the person living there.  The people that live in the building and in the surrounding area relentlessly called law enforcement of every kind, trying to get someone to at very least let the dog in.  The dog was put back in the apartment, but that was as far as law enforcement could take things.

The police filed a report, and advised the person that should something of this nature, or anything that could be considered neglect or abuse will be very bad for them, legally.  At this time, the dog is still there, but that hasn’t stopped people from commenting on social media.  Many believe that the dog should have been removed, but given that there were no prior reports of animal neglect or abuse by the resident in question, the warning is the best they could do.

Todd Hofley is the president of the Liberty Village Residents Association (you can click the link to view the Facebook page).  Since the incident occurred at the complex, he has proposed a new set of regulations.

“I will bring forward a potential template for pet owners that stipulates if there is reasonable belief that their pet is in immediate and life threatening danger because of getting outside that the condominium corporation has the right to enter the unit and bring the animal inside,” said Hofley on Facebook.

What do you think?  Those of us that live in colder climates would assume that not putting your dog outdoors in the cold for hours while you leave is simply common sense.  How far would you go to save a dog’s life?  Have you, or has anyone you know had to call law enforcement because of someone else’s neglect?  Share your stories with us and your fellow Life With Dogs fans right here in the comment section below, or on our Facebook page, which you can view by clicking here.

Special thanks to The Dodo for sharing the story.  To see their article on what to do if you see a dog chained up outside in the cold, click here.