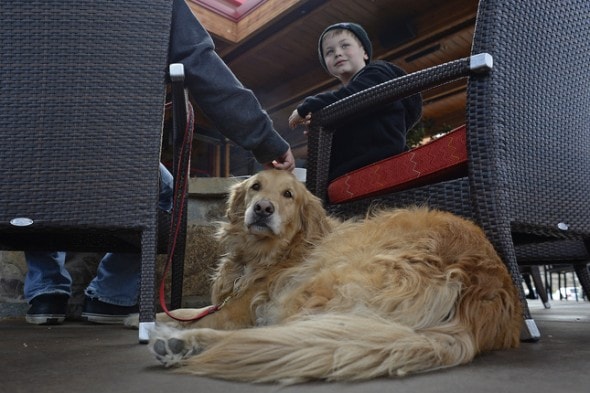 A new law has been passed in California that will allow pet owners to dine together with their pets at restaurants outdoors when patio seating is available.  Governor Jerry Brown, proud pet parent of a Welsh corgi named Sutter signed the bill into law together, and they couldn’t be happier about the decision.

The rules seem pretty basic.  The dog must remain leashed, can only be seated in an outdoor-dining section, and must remain well behaved at all times.  Also, the dog cannot be brought into any areas where food is being prepared.  So it all seems fairly simple.

Assembly member Mariko Yamada was the one championing the bill from the outset.  In a message posted on her Facebook page, she wished everybody “bone-appetit.”  She also added in the message, “Amidst all the horrific and depressing news around us, I hope this bill helps make people a little happier, and businesses who wish to accommodate diners with dogs safe from being unnecessarily cited.”

The law fully goes into effect as of January the 1st.  People have been allowed at particular hot spots in California to bring their dogs and be seated outside for a while now, but have been doing so at their own risk.  Up to now, the practice was illegal, and business owners would sometimes face fines for allowing it.

David Wiesner, chef and owner of Siena Bistro in Willow Glen has always had a pro-doggy patio policy there every Thursday evening.

According to Wiesner, “The law going into effect in January is the law that I thought was already in effect.”

Along with Wiesner, many other California restaurant owners believed that there wasn’t any laws against having your dog dine with you outdoors.  Now, they are 100% sure of it!