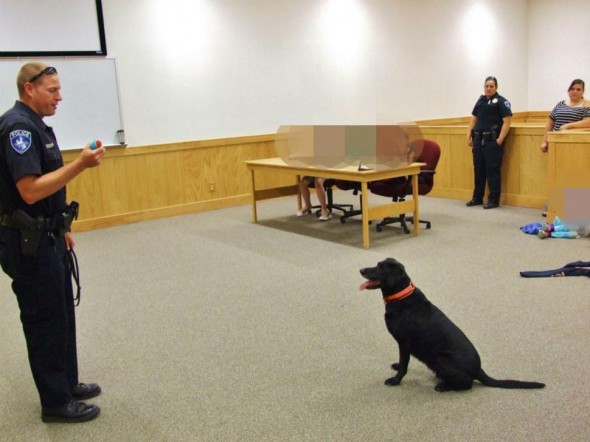 Yet again, another blundering police officer, this time from Wyoming, is being held responsible for the needless death of another dog.  This time however, the officer didn’t illegally gain entrance to a property and shoot the dog.  This time, the officer is allegedly responsible for leaving his canine in his cruiser for far too long, and the dog that was supposed to be his partner died in the oppressive heat.

An investigators statement filed with the Natrona County Circuit Court states officer Zachary Miller left Nyx, his 10-year-old black Lab canine partner, in his cruiser for over nine hours.  The vehicle had been running, but the air conditioning was not turned on.  Temperatures outside the car were over 86 that day, making temperatures in the car well up over 100 degrees.

Miller is a four-year veteran of the Mills Police department and is pleading not guilty in the incident.  Nyx was a specially trained drug sniffing dog and had been with the department since 2006.  Miller had been her handler and partner for two years up to this point, and even lived with Miller and went on family vacations with him.

Mills Chief of Police Bryon Preciado said, “I’m not justifying it.”  He says it’s in no way normal for anyone to leave a dog in a car that long, regardless of who that dog is and if they were an officer or not.

The court papers filed contain an affidavit asserting Miller left his car and entered the police station at 6:00 am.  He did not return to the car until about 12:20 pm.  The affidavit clearly states that dogs are allowed into the station.

While Miller was inside the station, he was training an officer in proper police procedure for officers on patrol.  Preciado said Miller is no longer a training officer, and the rookie officer he was with is not being held responsible for anything in regards to the matter.  Miller is current still employed with the department, but is off of active duty, and was given a one week suspension starting the day Nyx died.

“It was a mistake he’s going to have to pay for,” said Preciado.  “He’s going to be disciplined through our department.”

Preciado also said that before the station acquires a new police dog, all cars will be fitted with a device that ties to a key fob officers responsible for dogs will carry.  It will alert them if the temperature inside the vehicles is getting too hot or cold.

When are police officers going to start treating dogs, even their own partners, better?  The stories of officers and dog incidents keep piling up, and there seems to be no end of things in site.  To be fair, police departments across the country are starting to do things about this ever increasing problem, but it’s not happening quickly enough, or in every department, in every station like it should be.

We here at Life with Dogs never advocate the leaving of any animal in any car at any time for any reason, and the reasons for that are more than evidenced by stories just like this one.