Yukon was one of 200 dogs rescued from a cruelty case in rural Ohio in September, 2010. Shelters and rescues from across the country came forward to help place the dogs, some of which were transferred to the Animal Farm Foundation, an organization in New York that works particularly with and for pit bulls, a breed too often discriminated against. 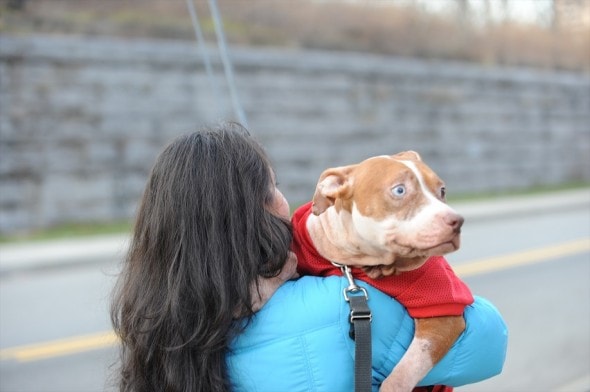 Yukon was a unique dog from the start. He was a wrinkly, older pit bull who just had a way of making everyone fall in love with him. He was so eccentric that he came to represent how very individual each dog’s personality is. Within days of arriving at the Animal Farm Foundation, he traveled with staff to an interview in New York City, winning the hearts of everyone involved.

Yukon soon found his forever home with the founder of the Unexpected Pit Bull, Jyo Buyyala, and her young son. Jyo shared a little about Yukon (Yuki as they called him):

“Yukon Cornelius was such a character. He challenged most stereotypes about dogs in general. Yuki so preferred being indoors, he quite simply refused to go outside! For our daily walks, I would carry him like a toddler for a few blocks, his paws clinging to my shoulders, before I put him down on the sidewalk…

Forever young at heart, Yuki was so beloved just by being himself. Our household was quite hectic when Yuki first came into our lives. Almost instantly, he claimed his ‘spot’ at home and slept deeply most of the time and would sit up for a hug from my toddler son and lift his head for a kiss from me. Like a perfect gentleman, he asked very little from us. At a time when my family was still gaining our footing through some tough life transitions, Yukon was our rock. His sweetness was our constant. His love was our healing.”

Yukon lived the remainder of his life happily with Jyo and her son, dying in his characteristic quiet grace. He left a legacy and, though he would be irreplaceable, Jyo felt that it would be honoring to his memory to rescue another pit bull in need of a home. So, as Jyo put it:

“Enter Neyya. She burst into our lives with an explosion of enthusiasm and joy. She infuses us with daily doses of endorphins by having us laughing often at her antics. We surrender to her irresistible, full body hugs. Her head is our favorite landscape for planting big, fat kisses. She models appropriate play, listening, kindness and tolerance to my 5 year old son. He found a best friend in sweet Neyya.” 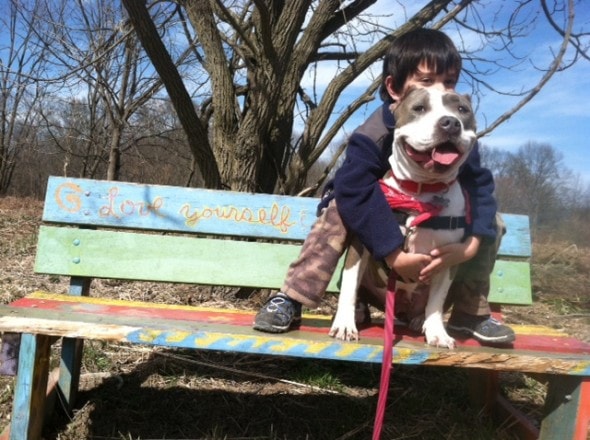 Neyya was also adopted from Animal Farm Foundation and continues to live a full life with Jyo Buyyala and her son. Yukon and Neyya both represent the beautiful effect that adopting dogs can have on a family and the very different personalities that dogs from the same breed, including pit bulls, often have. For this reason, Animal Farm Foundation works tirelessly to end discrimination against pit bulls simply based on their breed and to give each rescued pit bull a happy life in a forever home.