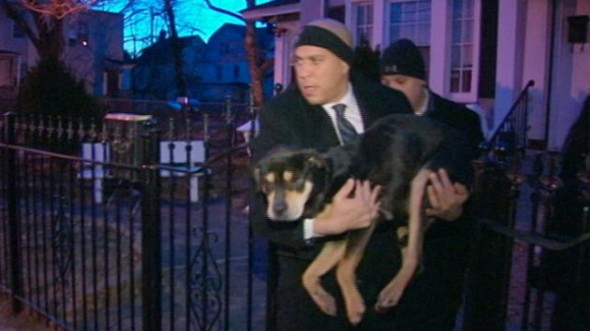 Newark, New Jersey residents are already familiar with their mayor’s ability to make headlines for his interesting exploits, and Cory Booker’s latest deed is just another reason why many hail him as a hero.

A reporter and camera crew were on the streets covering a story when they spotted dog out in the cold.  They passed by the area again hours later and were stunned to see the poor dog was still outside.  Reporter Toni Yates tweeted Mayor Booker to ask for help.  Other fans re-tweeted the message, and before long, Booker was on the scene.

“This is brutal weather. This dog is shaking really bad and you just can’t leave your dogs out here on a day like this and go away and expect them to be OK,” Booker said.  “Hypothermia on any animal including a human animal will set in pretty quickly.  So this is very sad.  You can just feel the dog shaking pretty badly.”

He picked the frigid dog and put her in the back of a police car.

“If you’d crank up that heat, I’d appreciate it,” Booker said to an officer.

He called Moises Rodriguez, one of the dog’s owners, and told him it was unacceptable to leave a dog out in such weather.  Rodriguez said they were visiting someone in Queens, and didn’t even know their dog, Cha Cha, had gotten out.  It was an accident, and they thanked Booker for saving their dog, who is a new mother.

Booker later got back to the reporter who tipped him off, tweeting:  “Because of you that dog was rescued.  Thank you for reaching out.  Thank u for your kindness.”

This is not the first time the humble mayor has helped come to the rescue.  He and two security members saved one of his neighbors from a house fire last April.  Booker also recently made a show of solidarity for people who live on little by living on a food stamp budget for a week, he responded to a hungry Twitter follower’s request for Hot Pockets by getting hundreds of vouchers for free Hot Pockets, and he opened his home to help victims of Hurricane Sandy.