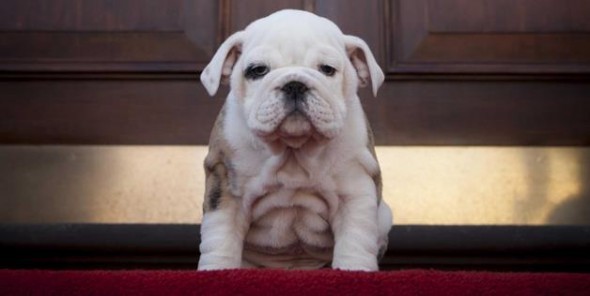 At only 9-weeks-old he is a bit young to be a Marine, but in only a little over a month he will have that title. His name is Chesty and he is an English bulldog and the future Marine Corps mascot.

Mascots are an important part of the Marine Corps, and the English Bulldog is one of those. Marion F. Sturkey explains the origin of the bulldog mascot in his book “Warrior Culture of the U.S Marines”:

“Thanks to the German Army, the U.S. Marine Corps has an unofficial mascot. During World War I many German reports had called the attacking Marines ‘teufel-hunden,’ meaning Devil-Dogs. Teufel-hunden were the vicious, wild, and ferocious mountain dogs of Bavarain folklore.”

“Soon afterward a U.S. Marine recruiting poster depicted a snarling English Bulldog wearing a Marine Corps helmet. Because of the tenacity and demeanor of the breed, the image took root with both the Marines and the public. The Marines soon unofficially adopted the English Bulldog as their mascot.”

In October 1922 the Marines obtained their first live English Bulldog, King Bulwark, at the Marine base at Quantico, Virginia. The dog was renamed Jiggs and officially enlisted in the Marines. Following Jiggs came Jiggs II and several other bulldogs. In the 1950s the mascot was named Chesty to honor Lt. Gen. Lewis B. “Chesty” Puller Jr., the mascot’s name has been Chesty ever since.

The newest Chesty, Chesty XIV, arrived at Marine Barracks in Washington D.C. on Valentine’s Day. He will enter obedience school and earn the title of Marine when he is named the next Marine Corps mascot on March 29th. As mascot his duties include marching at events and looking tough in his custom dress blues.