In Norway, a man risked his own life to rescue his dog, when the pet fell through the thin ice of a frozen lake. The dog was chasing after some birds before it fell into the cold, icy lake. 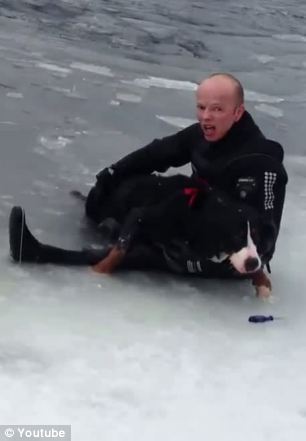 Ove Karlsen is the pet owner who crawled through the thin ice, until reaching his pet. He rescued his four-legged companion from dying in the sub-zero waters.

The heroic act was captured on camera by the pet owner’s friend who had come along on the walk.

In the video you can see how, Karlsen crawled through the ice until he reached open waters. He then submerged himself in the icy lake and used the frozen edge to glide himself to his dog.

The man calls its pet’s name and tries to motivate the canine to keep fighting for its life. Once in his arms, both man and dog slide down the frozen edge until the dog owner is able to place the majority of his pet’s body on top of the fragile ice. Karlsen then ties a rope on the dog’s harness and the camera man pulls the dog to safer ground.

Karlsen is left in the background struggling to come to safety, but he too is able to exit the frigid waters.

The canine was taken to a veterinarian and was found in good health. The pet made a full recovery after the frigid plunge.