This comes from The Animal Rescue Site.  They feature fan-submitted rescue stories and merchandise – everything from clothing to pet supplies.  With each item purchased, food is donated to shelter pets in need. 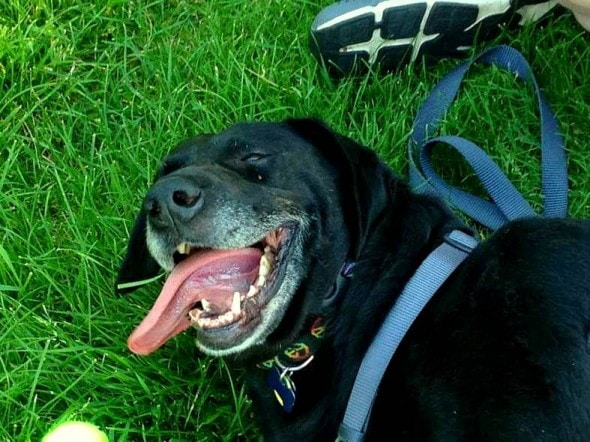 When I started dating the wonderful man who is now my husband, my teenage daughter became a master saboteur. She didn’t want him in our lives.

My daughter talked often of getting a large dog but I had reservations. First, though we had a fenced yard, our house was small and I feel strongly that pets are family and should not live outside. Second, our little dog, Oreo, has such an alpha personality, I did not know if he would accept another.

My daughter studied rescue websites and grudgingly worked with my fiancé (to work on me) about possible dogs to adopt. I agreed they could go look at dogs with some parameters: they had to take Oreo with them to make sure they found a good match, they needed to look for a medium dog, and I did not want a puppy but it needed to be a dog young enough to go running with my daughter.

They found a dog at a local shelter that was more than happy to let Oreo be the boss, but he was HUGE! When I came home that day, I was introduced to a senior St. Bernard – Black Lab mix, named Findley. From his scars, he had not lived an easy life.

Findley was the best thing to happen to our family. My daughter fell instantly in love with him and through Findley built a close relationship with her stepdad. He is my husband’s best friend.

After almost three years of loving our Findley, we received word from the vet that at the grand age of twelve he is starting to have problems and soon we will need to say goodbye. For now, we are treasuring each moment with Findley, giving him all the belly rubs and love he deserves.

12 thoughts on “Not What I Wanted, But What We NEEDED”