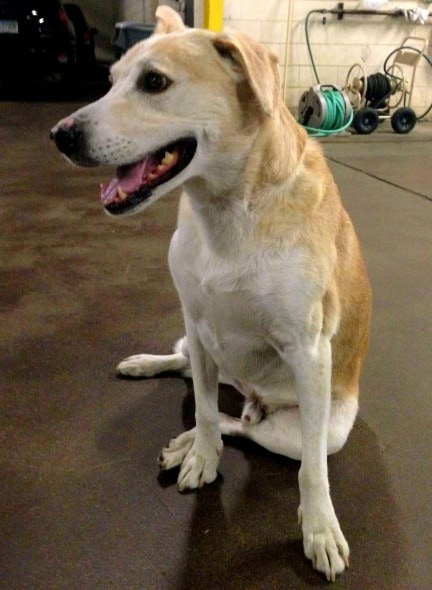 When Louis Christiansen’s dog went missing back in February, he had all but given up on ever seeing him again, but because of the compassion of a dedicated police officer, a man and his best friend were recently reunited.

February 8th seemed like any other night when the St. Paul, Minnesota resident let his eight-year-old dog out to relieve himself, but drastically changed when the German shepherd-Labrador mix did not come back inside as he always did. The dog, named Lightning, didn’t return at all.

His owner called police, but was met with the response that missing dogs were not “high priority,” and was told to call back if the dog returned. Fortunately, one officer took a special interest in the case.

Christiansen called the police department several times a week, hoping for good news and lamenting how lost and sleepless he was without Lightning. Sgt. Doug Whittaker understood; in 2011 his family mourned the loss of their 13-year-old yellow Lab, Keno, who had been a service dog for his daughter, Alex.

“I really got a sense that he was alone and this dog meant everything to him,” Whittaker said.

Christiansen believed his dog had been stolen by a woman who seemed keen on Lightning: a transient with family in the area. Whittaker contacted her family, who was willing to cooperate as much as they possibly could given the nomadic tendencies of their family member, whose whereabouts were often unknown.

“We had sightings,” the officer said. “She surfaced off and on over the last five-and-a-half months.”

She contacted her relatives for money, but did not like to meet with them for fear of being caught with the stolen dog. She called in July, telling them she did have the dog with her at her sister’s home in south Minneapolis, but was soon leaving the state so she would not be busted. They called Whittaker, who, though off-duty at the time, made no hesitation to race the nine miles to Minneapolis.

Warned that the woman could become irrational and hostile, Whittaker was persuaded to allow family members to speak to her first in an effort to coax her to turn the dog in.

She was finally convinced when Whittaker told her he would call and keep her updated on Lightning after he was returned.

Lightning seemed despondent on the trip back to his home, and Whittaker wasn’t entirely sure he was even the right dog until he was reunited with Christiansen, who had been waiting outside.

“That’s him! That’s him,” he yelled when Whittaker’s truck pulled in. Lightning “sprang to life” when he saw his human.

“The dog jumped into his arms and they rolled around on the ground. It was quite a happy reunion. This truly is the most valuable thing in his life,” Whittaker said. “It was really satisfying. In my career, you don’t get to see this very often.”

Christiansen was so happy to have his buddy back that he opted not to press charges against the woman, who kept Lightning in remarkably good care, considering her lifestyle and limited income.

“It was the best possible scenario,” said Whittaker, who shrugged off his involvement. However, Eastern District Senior Commander Joe Neuberger was quick to lavish him with praise:

“He really is a great example of an ambassador for the police department.”