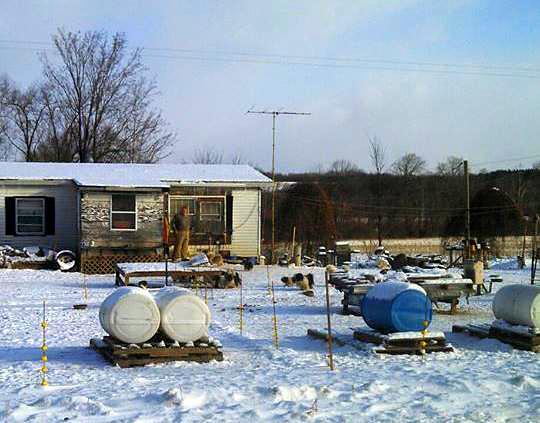 A breeder in Sprakers, NY has been charged with failure to provide adequate shelter after photos of his many dogs left outside in -20 degree weather surfaced on Facebook. Animal lovers took action by contacting the SPCA and local and state police, and now 40 of the dogs have been seized.

Though a number of concerned neighbors called police about Herbert and Kathy Weich’s dogs, who were left to fend for themselves outside, very little was done. State police claimed to have inspected the premises and did not find anything illegal happening. (Considering how little so many police seem to understand about dog behavior and how to distinguish between an aggressive, out-of-control dog and a friendly pet that has gotten loose, is it really surprising to see that other police would deem it appropriate to keep dogs outside in fatally cold conditions with only plastic barrels for shelter?) 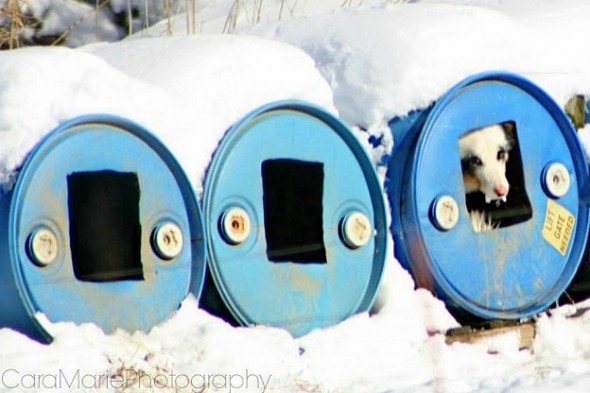 “For all dogs that are left outdoors in inclement weather, a housing facility, which must: (1) have a waterproof roof; (2) be structurally sound with insulation appropriate to local climatic conditions and sufficient to protect the dog from inclement weather; (3) be constructed to allow each dog adequate freedom of movement to make normal postural adjustments, including the ability to stand up, turn around and lie down with its limbs outstretched; and (4) allow for effective removal of excretions, other waste material; dirt and trash. The housing facility and the area immediately surrounding it shall be regularly cleaned to maintain a healthy and sanitary environment and to minimize health hazards.” (For more information on New York’s animal cruelty laws, please click here.)

The Weiches are the breeders of Flat Creek Border Collies, but a number of Shih Tzus were also on the property. Collies may stand a somewhat better chance of surviving the cold, but Shih Tzus are not built to withstand temperatures below zero. It was reported by a neighbor that two puppies had already died after being frozen to the ground, and were whisked away in a wheelbarrow, but so far there has been no evidence provided to support that. 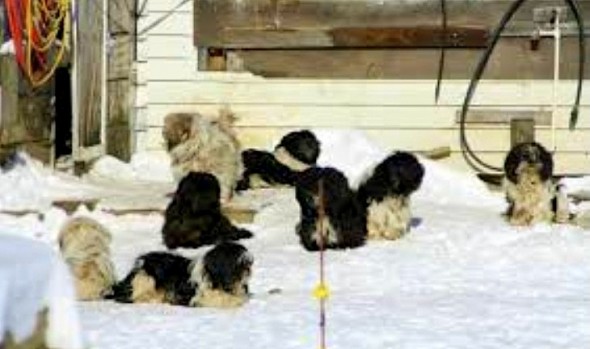 Delusional dog breeder Katharine Dokken, whose own poodles were taken from her home after they were found to have deformed feet from living in feces-filled, wire-bottomed crates, has been stirring up trouble by trying to garner sympathy for these breeders, as well as herself. She recently wrote a book and has a blog claiming animal rescue groups are terrorists and lynch mobs, and steal perfectly happy and healthy dogs from breeders like herself so they can make millions of dollars in adoption fees. She believes these dogs prefer living in the snow and bitter cold rather than indoors, and has somehow managed to find other like-minded individuals who believe breeders are saints and dogs have no place indoors, unless they are confined to lifelong torture in tiny crates.

Despite Dokken’s ludicrous rantings, the majority of people who saw photos and video of the Sprakers dogs were horrified not only by their living arrangements, but by the apparent apathy of police in New York state, which has recently been working to crack down on animal abusers, thanks to Senators Greg Ball and Mark Grisanti. After hundreds, if not thousands, of people shared the photos, contacted various chapters of the SPCA and demanded police do something, Weich was finally charged and had the dogs removed from his “care.” 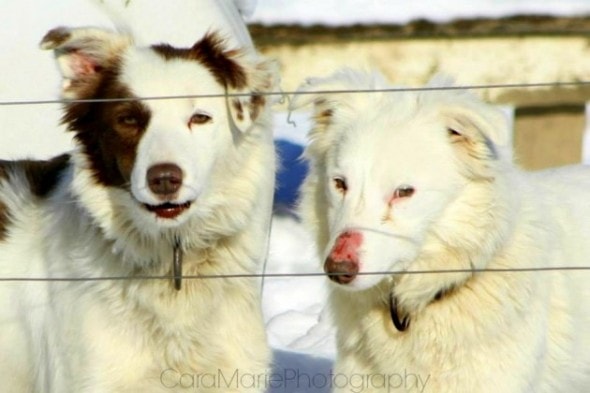 The Lexus Project got involved, and attorneys Matthew Albert (Buffalo) and Richard Rosenthal (Queens) drove in to file a lawsuit against police and Weich before the cold snap. Before court on Tuesday, Weich agreed to permanently surrender his older male dogs to the Montgomery County SPCA and to bring all of the puppies indoors.

Other dogs were also seized but will be returned if he does as the court asks.  Leaving dogs outside without proper shelter is only a violation.  Knowing how cold it is, this would be considered attempted murder or conspiracy to murder if these were humans, but unfortunately the only punishments that can be given are fines and seizures of animals. 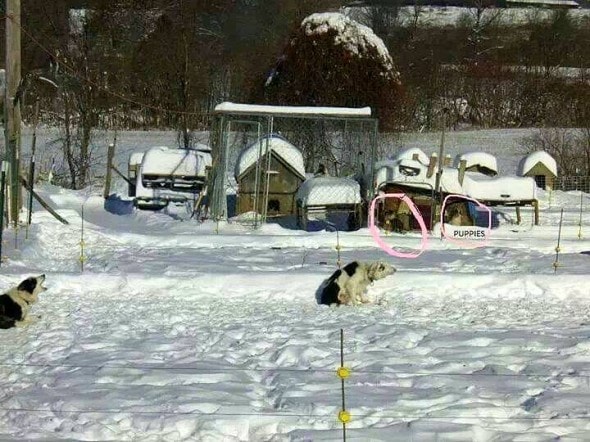 “On December 31, 2013, State Police in Fonda received a complaint of dogs being kept outside without adequate food, water or shelter at a location in the town of Root, New York. Members of the New York State Police responded and investigated the complaint, interviewing the property owner at his Rappa Road, Sprakers address. Primitive housing, food and water were observed on the property and no animals displayed signs of distress or appeared to be in immediate danger.

As the investigation continued, and based upon the recommendations of a licensed veterinarian and consultation with the New York State Attorneys General Office, the owner of the property, HERBERT WEICH, was charged with a violation of the Agriculture & Markets Law section 353-B(2), for failure to provide adequate shelter.

A preliminary hearing was held in Montgomery County Court on January 7, 2014 to determine if Mr. Weich’s dogs should be seized. An agreement was reached and prior to the hearing, Mr. Weich volunteered to relinquish some of the dogs to the Montgomery County Society for the Prevention of Cruelty to Animals while more substantial shelters were constructed.

Mr. Weich will answer the Agriculture and Markets Law charge in the Town of Root Justice Court on January 13th.” 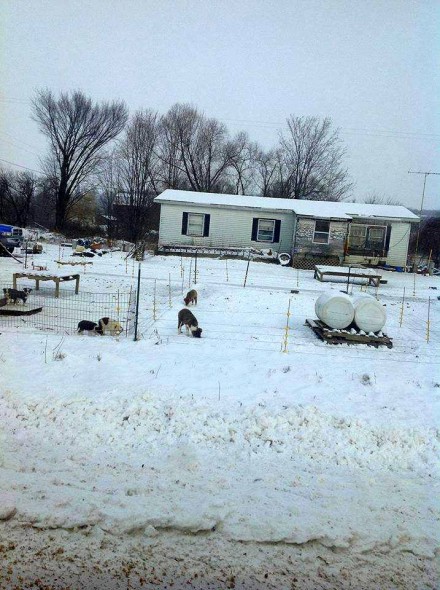 There have been varying accounts of Weich’s views on the matter, from some saying that he has simply become overwhelmed by the large number of dogs (but he kept letting them breed?), to a quote from him saying, “My dogs are fine. Anyone who saw them knows that.”

However, he is making the best effort possible to provide proper shelters for the dogs. He has accepted help from many neighbors, who have donated blankets and food. Neighbor Brian Clukey, who, like Weich, has been receiving threats from heated animal lovers, will be building the 27 insulated dog houses, which will cost about $170 apiece.

“Someone threw nails in my driveway,” he said. “Another person shouted that I was as bad as my neighbor. I need this to stop.” 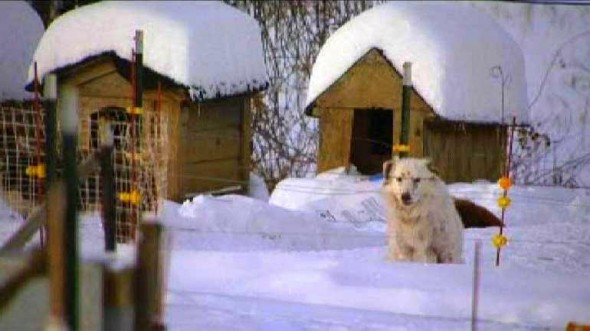 He has lived by Weich for 10 years, and says in all that time, all the dogs were healthy. Even veterinarian Caroline Ennis, who at the request of state police visited the farm, said the 90 dogs were not in danger, had food and heated water, and did not appear cold, but she does feel that plastic oil barrels are not sufficient housing for animals kept outside all the time. However, since the dogs have been taken in and examined by other vets, many are reported to be underweight and suffering from open sores and matted fur.  If you would like to donate towards their care, please click here.  If you would like to donate to the Sprakers dogs that were taken in by Glen Highland Farm, please click here.

It is likely that Weich will have many of his dogs returned, but he is making every effort necessary to comply with the order to provide insulated shelters in the next two weeks. He says he does not know how he will afford that cost, as his business is not very lucrative, and most of the money brought in only covers dog food and vet care. Perhaps he should start a fundraiser.

Though these dogs are currently safe, there will always be others who need our help. This is the fourth in a string of dogs who is forced to live outside and be abused by a cruel child. This dog is owned by Mary Jansen, 602 E Washington, Marshfield, MO. Animal control refuses to do anything, and it won’t be long before this dog dies an icy death because of their unwillingness to help. If the St. Louis police could rescue a freezing dog, why will no one in this area do the same? There is no SPCA in Webster county, only a humane society, but perhaps they can help. 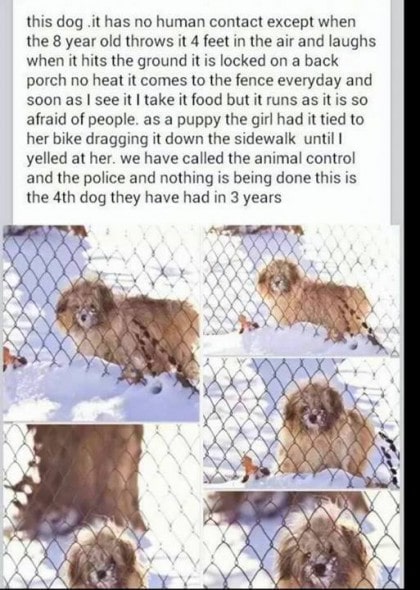 The address where this poor dog is being kept is 25 Old Salem Road, Woodstown, NJ 08098. ASPCA groups in the area have apparently been alerted to this dog’s need for a rescue, but so far, all that has been done is to throw a tarp up on a fence. Hardly protective from temperatures below freezing. The NJ SPCA needs to get involved and stop this! 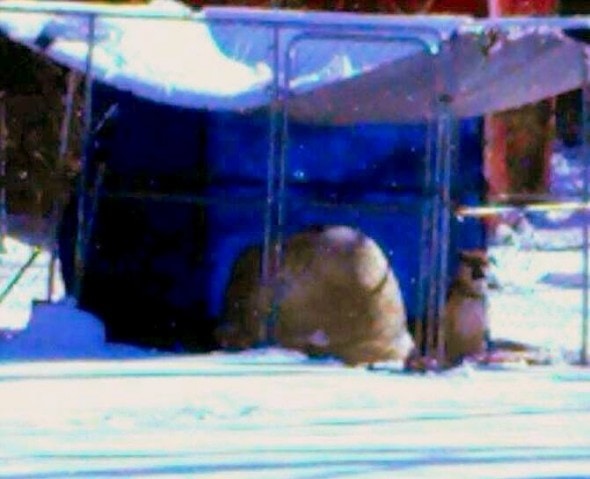 The Sprakers dogs were saved because people on Facebook refused to let them die and spoke up. Now you have the chance to do the same for the thousands of other dogs in the same position. If you see something, say something! Take photos and videos, call police, alert animal control and local shelters, and get the word out on Facebook. There is power in numbers, and together we are many!

For more information, photos and updates on the dogs, please visit Save the Dogs from Flat Creek Border Collies.