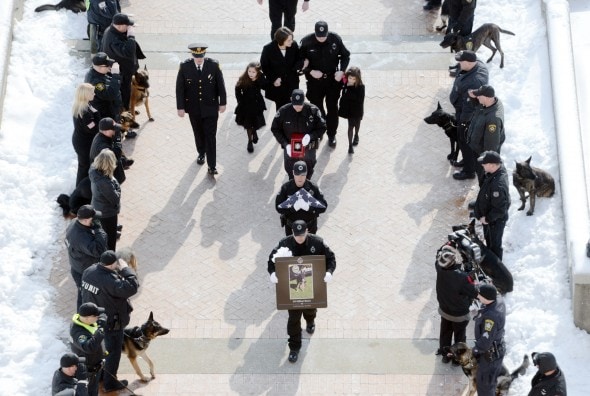 On Friday morning an estimated 1,200 people gathered to honor and mourn the passing of Pittsburgh police dog Rocco, who died last week after being stabbed during an arrest.

Rocco’s passing has touched many people, not only in the Pittsburgh community, but around the country. The brave police dog died last week, days after he was stabbed while trying to apprehend a fugitive. His partner and two other police officers were injured, and Rocco’s actions very well prevented the deaths of those three officers.

Initially Rocco’s partner, Officer Phil Lerza, requested a closed funeral. The outpouring of support that came in from the public changed his mind, however, and the funeral was opened to the public.

Rocco received full police honors. Led by a bagpiper, a procession of uniformed police officers wearing white gloves carried a large photo followed by Rocco’s urn and a flag. Officer Lerza, accompanied by his wife and two daughters, walked right behind him.

Many in attendance had never met Rocco or Officer Lerza, but they wanted to pay their respects to a hero.

“Rocco was certainly brave,” said attendee Gerry Hoel. “He was definitely not just a dog.”