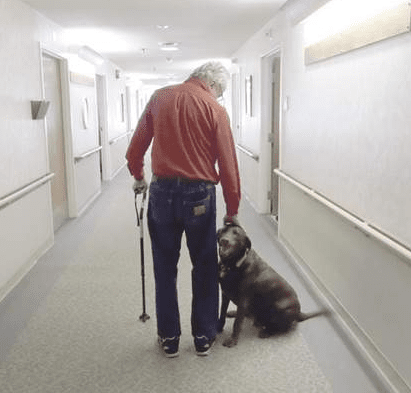 Rusty was facing being put down at a shelter when the administrator at a nursing home came to his rescue and gave him a second chance as the facility’s companion dog.

In 2008 Rusty was found as a stray by Sue VanDeRostyne’s sister. The woman was unable to take the dog in so instead she took Rusty to a shelter and worked on finding his owners.

“He was obviously someone’s pet,” said VanDeRostyne. “He had out-of-state tags and had been well trained.”

VanDeRostyne and her sister worked tirelessly to try to find Rusty’s owner, but soon time ran out. Rusty was facing being put down when VanDeRostyne stepped in to save him. VanDeRostyne works at the Toulon Rehabilitation and Health Care Center in Toulon, Illinois.  After getting approval from Petersen Health Care she was permitted to bring rusty to the center on a trail run to see how he would fare as a companion dog for the facility.

Rusty has fit in perfectly at the center and has become an important part of the team there.

“The only problem that has ever come up with Rusty is not letting him get too fat from all the dog treats from the residents,” said housekeeping manager Chrissy Calef.

Rusty has helped brighten the lives of so many of the residents at Toulon Rehabilitation and Health Center that they wanted to do something special in his honor. The month of February the center is holding a pet food and supply drive in his honor. All the donations will be given to the Henry County Humane Society, a no-kill animal shelter.

Donations for the pet drive can be dropped off at Toulon Rehabilitation and Health Care Center. There address is: