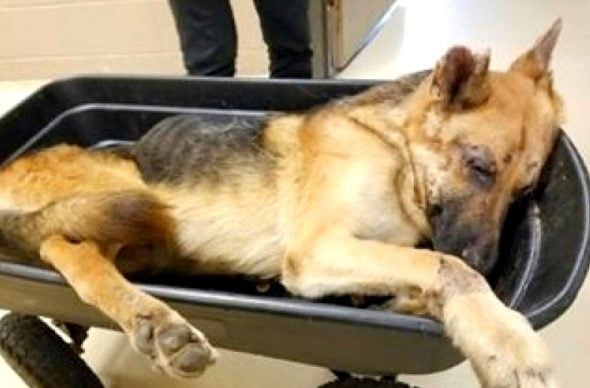 When an unresponsive German shepherd named Cubby was dumped at a shelter in a wheelbarrow, he was paralyzed, mangled, starving, and soon found to be suffering from a mystery illness.  Tests came back negative, treatment wasn’t working, and his rescuers thought it might be kinder to end his suffering, but the look in his eyes told them not to give up.  They tried one final treatment, which would either cure him or kill him….

Cubby’s journey has been long and harrowing, but he refused to surrender, so his team fought alongside him.  This is his story, as told to me by Eric Holliday:

It all started on a late afternoon in early November when one human gave up on him. One human never cared. His owner delivered this unresponsive, basically paralyzed boy to Harris County Animal Shelter (in Houston). The scenes of his intentionally mangled ears and lifeless body in a wheelbarrow are as fresh today as they were then.

Lucky for this boy, there are far more humans who did care. The staff at the shelter put out pleas for help and our group – Val’s Pals GSD and Large Paw Rescue – stepped in. The rest is an amazing journey of struggle, faith, perseverance, and hope. 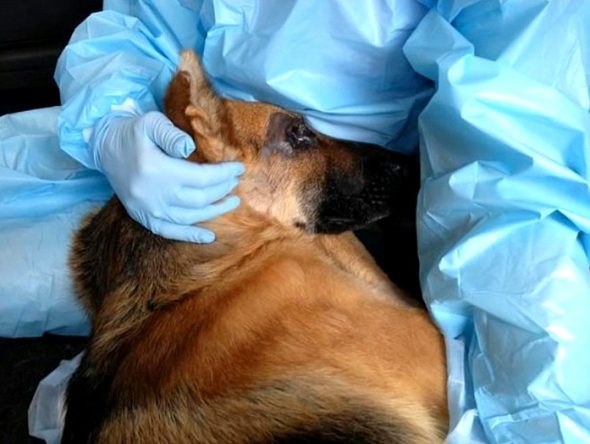 #Cubbystrong was born that day and began with a trip to Vergi 24/7, where after four days of seeing no response and exhausting all possible causes for his ailments, he was moved to Texas A&M. Days passed, showing little to no improvements, and no further answers to what was causing the swelling of his brain and spinal cord. Every possible disease was tested, every possible cause was exhausted. He was getting no better when we had to make the most difficult of decisions:  how long do we allow him to suffer – at what point do we face the reality that he is simply not going to improve?

We were not comfortable making a decision on his life without traveling to A&M to see him again. We were confident his eyes would tell us if it was time to let him pass. There was a look in him that day. We could see the plea in his eyes; he was trying, he wasn’t ready to give up.

The staff at A&M suggested one final option. The option came with grave risks. The last possible cause was a parasitic infection in his brain. The treatment plan was a high dose of ivermectin. Based on our conversations with the staff, there were two possible outcomes. He would begin to show signs of improvement, or the treatment would send him over the rainbow bridge. 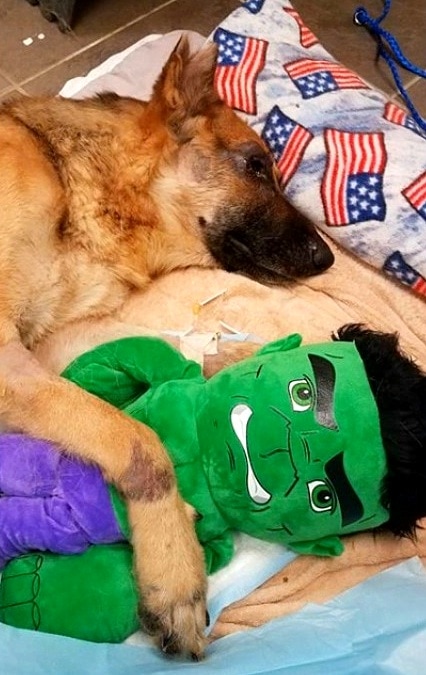 The day following the first injection, he showed signs of improvement, but not enough to give confidence the treatment was a success. We traveled back to A&M to see him for what we thought was the last time. Again, we could see the will to live in his eyes and agreed to move forward with a second injection.

Mid-November, the day following his second injection, he stood for the first time and began to walk. Our group was overjoyed at this result, and based on continued improvements we were able to bring him home, and for the first time in his life, he was able to live in a loving and caring home.

This home proved to be the perfect environment to foster and encourage his continued improvements. While Cubby was able to walk, he was not stable or strong, and he still presented neurological deficiencies. Dr. Smith at Sienna Plantation Animal Hospital took over his day-to-day care. None of the doctors could say how far Cubby would progress, but all agreed that even if he showed no further improvement, he would be able to live a happy, healthy and full life. 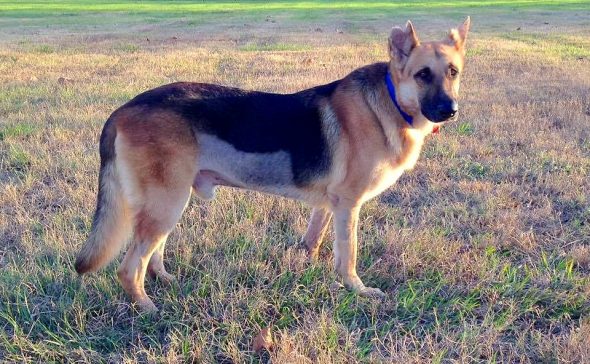 Cubby always loved people. He wanted nothing more than to be with you, have his head on you, and enjoy the most simple of human interactions. Showing us again, he never knew this side of human kindness in his former life. Cubby has continued to improve, and recently received the all clear from A&M’s neurological team to begin heartworm treatment. Today, Cubby is out running with his pack, enjoying life.

He far exceeded all expectations, he showed us a will and determination not seen before. He taught us to never give up hope. We know in the near future some lucky family will adopt this special boy who needed nothing more than someone to care. Someone to offer a way forward. #Cubbystrong proved no matter how cruel or uncaring some can be, they will always be outnumbered by those willing to do good, those willing to give time and money to help those in need.  #Cubbystrong proved all this and much more.

We owe special thanks to Dr. Ron at Vergi 24/7 and the entire staff for the care they always provide. Dr. Cyrus and Dr. Blair at Texas A&M, who cared for Cubby and never gave up. The neurological team at A&M who came up with the treatment plan, and Dr. Smith at Sienna Plantation Animal Hospital who is now caring for Cubby. Thank you all for the unwavering care and support you provided.

To see some of the many fantastic dogs and cats at Harris County Animal Shelter who urgently need to be fostered or adopted before it’s too late, check out their special Pets page on Facebook.  If you are interested in Cubby or another German shepherd, please click here.

2 thoughts on “Paralyzed, Unresponsive Dog Was Dumped in a Wheelbarrow, and Now He Can Run”