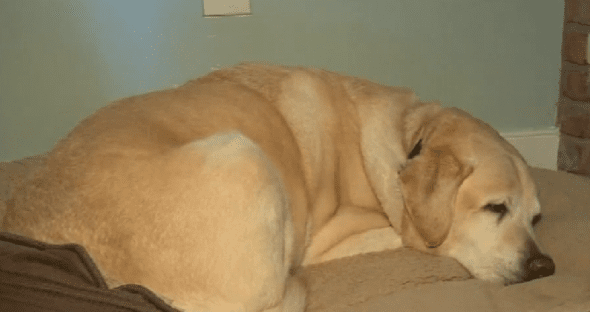 Passengers aboard a US Airways flight became outraged Wednesday night when the crew removed a blind man and his service dog. The flight eventually had to be cancelled.

Albert Rizzi is legally blind and was flying on flight 4384 from Philadelphia to Islip, Long Island with his service dog Doxy. Rizzi and Doxy have flown many times before and never had any issues, but things were different on this flight. A flight attendant told Rizzi that Doxy would need to be kept under the seat in front of him or the plane would have to turn around. The seat Rizzi was in didn’t allow for that though.

“I said to her, ‘I really don’t understand what the issue is. I can’t do anything. She was expecting me to put my dog in other people’s space. They were paying good money for those seats. It was kind of odd,” Rizzi said.

Two other passengers offered to let Doxy stay under the seats in front of them. When the plane sat on the tarmac for close to two hours Doxy moved into the aisle. The flight attendant once again confronted Rizzi and according to US Airways Rizzi became verbally abusive.

The crew made the decision to remove Rizzi and Doxy. As other passengers aboard the plane realized what was happening they became outraged at the crew and rallied behind Rizzi.

“When we, the passengers, realize what was going on, we were, like, ‘Why is this happening? He’s not a problem. What is going on?’” said passenger Frank Ohlhorst. “And we all kind of raised our voices and said ‘This is a real problem.’ The captain came out of the cockpit and he basically asked us all to leave the aircraft.”

Once the flight was cancelled US Airways offered to transport passengers by bus from Philadelphia to Islip, New York. Rizzi, along with many other passengers accepted the offer. Rizzi was moved by the support he received from his fellow passengers.

“When I heard those people coming off the plane saying what they said, I felt like a million dollars and more humble than I have ever felt in my entire life,” said Rizzi.

US Airways is continuing to investigate the incident and reviewing how the situation was handled.