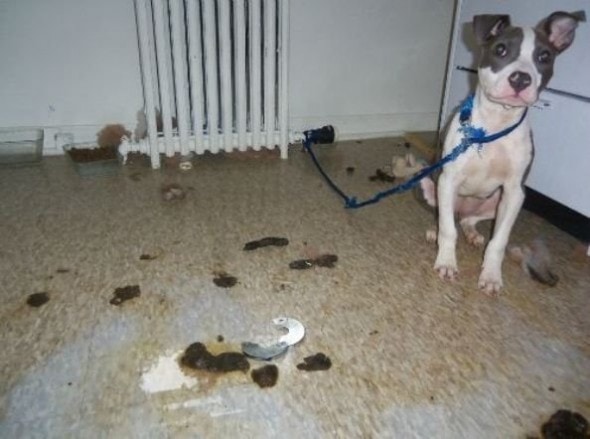 An offensive smell emanating from an apartment had neighbours complaining to the building manager. The management company made several attempts to contact the residents of the apartment, banging on the door, and sending letters, but there was no response. After several days, the manager entered the apartment in an attempt to find the source of the smell.

He was greeted with a young puppy cowering in her own filth. She had been tied to a radiator with a short piece of rope. She was left with no food or water and no means of escape. Apart from the puppy, the apartment was completely empty. The tenants had moved out, but left the poor pup behind.

The manager immediately called PETA (People for the Ethical Treatment of Animals.) They quickly arrived at the scene, and took the puppy into care. PETA say that she is less than five months old, and that she was very thin and dehydrated when they found her.

A spokesperson said “The puppy was in good health, apart from the dehydration and weight loss. She has now been adopted into a loving home, where she is a part of the family, and will never be left on her own again.”

At her new home, the puppy also has another dog to play with, so she has a complete, loving family unit.

PETA, along with law enforcement, are conducting an investigation into the abandonment of the pup.

Note: The information in this story was reported on PETA’s own blog, as written by Jeff Mackey, without the details we might want to know when reading it at an independent publication; like where the dog was originally living, where it is now, or when the rescue occurred.  Is PETA promoting their organization by reporting a case where they helped an animal? Yes. Are they still widely controversial and fighting the popular perception that they are not committed to saving lives? Yes. Is it at least beneficial for the dog involved that this one case was helped. Well, yes.

We neither endorse nor condemn the group here but are as aware as anyone of the controversies surrounding their philosopy and actions.