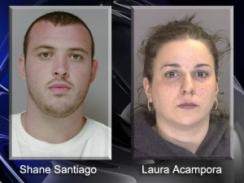 On Wednesday officials in Chester County, Pennsylvania busted a dog fighting ring operating out of Shane Santiago and Laura Acampora’s home that they shared with their five children.  The couple has been charged with cruelty to animals and endangering the lives of children.

Police first became suspicious of a dog fighting ring in the area when several dead pit bulls were found in the county over the past few months.  One dog was found in February maimed and left for dead in a roadside ravine. That dog, now called Radar, is recovering under the care of the Chester County SPCA. Another dog was found caged and burned along the side of a road in September.

Police were led to Santiago when he became part of a drug investigation. They also received several complaints from neighbors of the couple who reported regular visitors with out-of-state license plates sometimes leaving with injured dogs. Last week Santiago and Acampora were evicted from their rented home and police were granted access from the property owner to access the home. What police found was a “house of horrors.”

In the backyard were several doghouses. Two pit bulls were found injured and many appeared to be malnourished. One dead pit bull puppy was found wrapped in trash bags in a trash can. Inside the home training equipment was found, including treadmills, steroids and bite sticks. The walls and carpet of the basement, which served as an arena, had blood splattered on them. “It was a house of torture, a house of pain, a house of horrors for these dogs,” said District Attorney Thomas Hogan. “From the prosecutor’s standpoint this is troubling. From the standpoint of a human, from the standpoint of a man who loves dogs, this is disgusting.”

The couple’s five children were found to be very malnourished and have been placed in the care of relatives. Six dogs were rescued and taken to the Chester County SPCA. “We’re continuing to take care of their injuries, give them proper vet care and socialize them,” said Rebecca Turnbull of Chester County SPCA. “And then we’ll be able to evaluate their temperament and see what the future holds for them.” Anyone wishing to help the six dogs now in the are of the SPCA can make a donation to their Marshall Medical Emergency Fund at  their website.

Santiago has confessed to killing at least 10 dogs, including one dog that he hanged after it bit his daughter. Santiago and Acampora are charged with more than 30 counts of animal cruelty, endangering the welfare of a child, and conspiracy to commit animal cruelty. Officials hope the arrests will help police catch any additional dog fighting activity in the area. “We are calling on law enforcement, legislators, and the citizens of both Pennsylvania and the United States to stamp out this barbaric sport,” Hogan said.