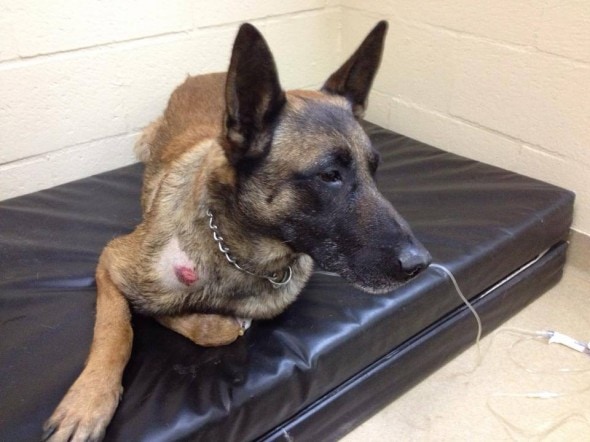 Drago, a patrol dog with the Sacramento County Sherriff’s Department, is going home from the veterinary hospital after he was shot through the chest by a fleeing suspect early Friday morning.

In the early hours of Friday morning 42-year-old Robby Joe Woof was fleeing police after a suspected car theft and fired multiple shots at the pursuing officers. One of the bullets hit Drago in the chest. The 6-year-old Belgian Malinois was rushed to VCA Veterinary Center for treatment.

Drago suffered a collapsed, lung but was lucky in that no other vital organs were struck by the bullet. Just as remarkable as his luck was Drago’s determination to get better. Drago made a remarkably quick recovery and was released on Saturday to his handler, Deputy John Halk.

Deputy Halk will be taking off work for at least two weeks to care for Drago and help with his recovery. Drago will undergo rehab exercises daily to heal muscle injuries in his right shoulder and leg that he sustained from the bullet. Another main focus of recovery will be getting Drago the rest he needs.

“The problem with Drago is he has no idea he is injured and wants to keep moving around,” said Sheriff’s spokeswoman Sgt. Lisa Bowman. “He does need his rest too.”

Drago is expected to be back to work in two to four weeks. The man responsible for Drago’s injuries, Robby Joe Woff, was found hours later with a self-inflicted gunshot wound and was taken to the hospital. He later passed away.