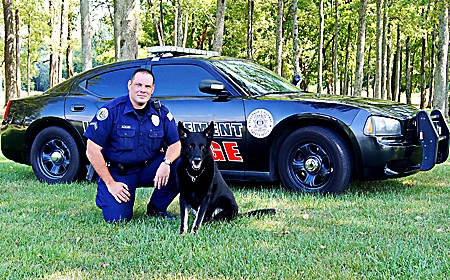 Brok is back to work on the police force after enduring a battle with cancer that caused him to lose one of his legs. Despite now having only three legs, Brok isn’t missing a beat and excelling at his job.

“He has obviously more will than a human ‘cause it hadn’t affected him a bit,” said Brok’s partner Corporal Brandon Adams. “He’ll jump, go upstairs. Slow walking is about the only challenge, is keeping his balance going slow.”

Adams first noticed something wrong with Brok when he spotted a lump on his leg. He initially thought it might be a torn ACL, but he soon found out it was much worse. Luckily Adams caught the cancer early enough to give Brok a fighting chance.

“I had learned that with osteosarcoma, if it had made it to the lungs, that there was no hope at all. Less than three months survival on it,” said Adams.

Brok was lucky that it hadn’t spread to his lungs, but he would still have to lose a leg. His back left leg where the lump was discovered had to be amputated immediately to prevent the cancer from spreading. Brok had his surgery on April 15th and only a few days after was back to work.

“[After the surgery] when she opened the door and he saw me, he just came running to me. Buried his head into my chest, like he’s giving me a hug,” said Adams. “Besides the shaved hindquarter and missing leg, you would have never known it.”

Brok is still recovering and will start his first round of chemotherapy this week. Things are looking good for the police dog. Adams is thrilled to have his partner back, but more importantly to have his best friend getting better.