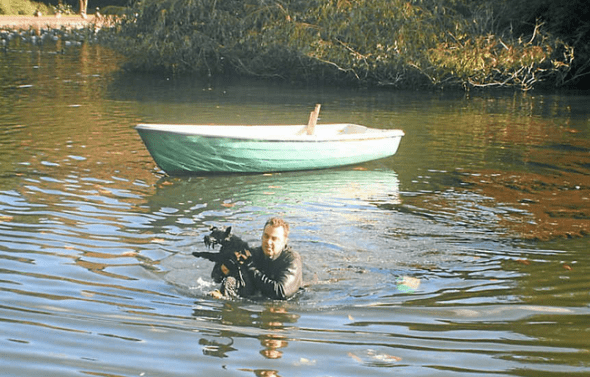 Police came to the rescue of a stranded Yorkshire Terrier named Lexi. When the dog jumped in the lake during the rescue Police Constable Ben Bates jumped in after the dog and saved her from drowning.

Lexi was with her owner at a park in Wolverhampton, England when the dog ran into the boating lake. Soon after entering the water Lexi began to struggle to keep her head above water and swam to a small island in the middle of the lake.

With Lexi stranded on the island, her owner and a park ranger called for help. Police Constable Ben Bates used one of the park’s small boats and a plank of wood to paddle out to the island. He coaxed Lexi in to the boat, but Lexi became scared and jumped out of the boat and back into the water.

PC Bates didn’t hesitate and jumped in after Lexi and helped her get safely to the shore. Although PC Bates was soaking wet, he was happy to have helped.

“It took five minutes to get the dog in the boat and she wasn’t happy. I’m not the best with dogs to be honest,” said PC Bates. “We were only 10 meters away from the island when the dog jumped out of the boat, so I just jumped in after her.”