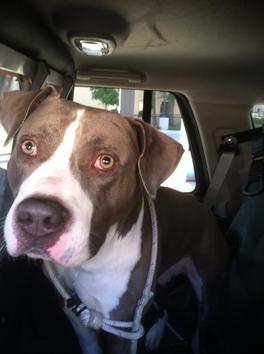 Thanks to a passerby and a police officer, a dog in Clearwater, Florida was saved from what could have been a tragic and unnecessary death.

Police Sgt. Joel Morley was working at an off-duty job at a pier when he was summoned and notified of a dog locked in a vehicle.  The engine was off and the windows were all the way up.  Temperatures were 70-75 degrees Fahrenheit, and the inside of the car could become much hotter.

Morley waited near the car, hoping that the owner would be back soon.  But the pit bull mix was becoming distraught, and he knew that he must act fast.  He broke a window and released the dog, whose name is Power.  Power was very friendly, and very thirsty.

Melody E. Dayer, Power’s 20-year-old owner, returned about an hour later.  She was intoxicated and confessed that she left her dog in the car for about two hours while she was hanging out in the area.

The Tennessee resident, who was visiting in Florida, was arrested for animal cruelty, and Power has been turned over to the SPCA.