When Chicago-based rescue group One Tail at a Time (OTAT) took one of their latest rescue dogs to the vet, they were shocked to learn what the pet’s past was like. Porkchop, a loving 6-year-old Labrador retriever-shepherd mix, had over 50 BB gun pellets lodged throughout his body.

OTAT’s board vice-President and rescue manager, Anna Friedman, told the Huffington Post the canine had come from a Carbondale, Ill., shelter after his former owner died. 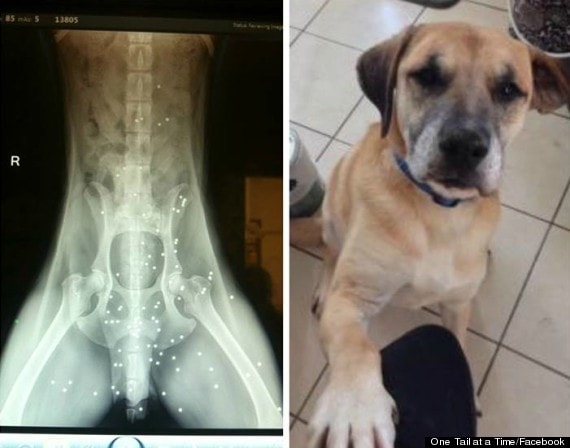 Even though not much is known about who committed the atrocious BB gun shooting on the sweet dog, OTAT volunteers believe a neighbor is responsible for the cruel act.

After x-rays and a thorough vet exam, veterinarians concluded the pellets are not harming Porkchop’s health. They don’t require removal. Instead, what the canine needs is a loving forever home.

After OTAT shared Porkchop’s story, many people became interested in donating and helping the pet, and days later, the once stray and abused dog found the perfect home.

“Porkchop has been adopted!” announced OTAT on March 27, 2013, on their Facebook wall. “Our sweet boy hit the jackpot by landing a spot with one of our favorite veterinarians, Dr. Teuber and her family (including another canine pal)! We sent him off with a ton of supplies, thank you all so much for helping us care for Porkchop!”

Learn more about One Tail at a Time and Porkchops new owner.