A ten-day-old puppy left homeless by the January blaze that destroyed her Wichita home has been adopted by the firefighter who saved her life.

Wichita firefighter Dan McElroy said when first responders arrived the fire was simply too intense, and despite their best efforts, paramedics were unable to resuscitate a mother dog and one of her puppies when they were recovered from the burning building. The lone survivor – the sibling of the puppy that did not survive, would come back to life just moments later after being resuscitated via oxygen treatment, giving everyone involved a sense of hope amidst tragedy. 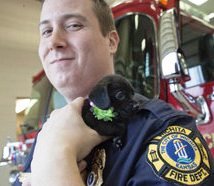 Given her age and the severity of the smoke inhalation she was exposed to, her caretakers at the Veterinary Emergency and Specialty Hospital of Wichita were concerned that she would not survive.

“When she arrived to our facility she was a critically ill animal,” said veterinarian Dr. Brock Lofgreen. She was observed closely, and after 48 hours the young pup began to rebound.

“She responded really well over the first 48 hours to the point she was able to go to a foster home,” says Dr. Lofgreen.

Now, the 10 day old puppy left behind when her mother and brother were killed is getting a new start.  The healthy, happy, playful puppy was named Ember by her foster family, and yesterday the man who saved her gave her a new home – his own.

Dan McElroy adopted the dog as a surprise for his wife Samantha.

“I obviously felt bad the dog lost her mom and sibling in the fire. My wife has been on me for quite a while to get another dog, we have a Chihuahua so I said I gotta adopt this dog,” said McElroy.

Ember would not have survived were it not for animal oxygen masks recently acquired by the Wichita F.D. that allow for a complete seal around the snout of the patient. Oxygen treatment and C.P.R. saved her life. Firefighters say the masks are necessary because human masks are only about 50% effective, and they know how important pets are to their owners.

“It’s become a priority once we know we don’t have human life risk and we have crews available that we’re gonna do whatever we can to save people’s pets,” explains Captain Bevis.

The McElroys were told that they were free to rename their new puppy if they wanted to, but considering what she has been through, they say they think the name suits her perfectly. “I think ‘Ember’ will stick,” Samantha said, smiling.