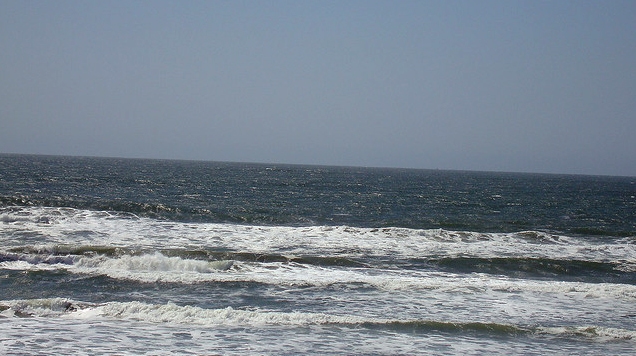 Over the Memorial Day weekend, a couple boating in the Florida keys said they could not believe their eyes when they found a three pound puppy swimming two miles offshore.

Geni Hernandez and her husband, George, were returning from a day on the water when they spotted something bobbing in the surf off Big Coppitt Key. At first they thought it was a small buoy, but as they neared the floating object, Geni realized that what they saw was a terrified puppy trying to swim back to shore.

“I can’t believe how big the ocean is, and we just rolled up her,” she said. “My husband said it was a buoy, but I said, ‘No, slow down. Slow down.’ It was a puppy swimming for dear life, and not another boat around. I almost died.”

The diminutive young dog, black except for white tips on her paws, was so small that the boat wake pushed her under. Geni was about to dive in after the dog when she resurfaced. When she did, Geni was able to reach her and pull her into the boat.

The couple said they assumed the pup was a lost pet because it was well groomed, in good condition, and was wearing a collar – but with no name tag.  Out of desperation they placed a Craigslist ad…and waited.

Fortunately, a friend of a friend who knew the dog’s owner saw the ad. The next day, Geni and George returned the dog to her grateful guardian, who explained through a translator that she had been boating in the same area, and had not noticed that the dog had gone overboard until after returning to shore.

“They went back out and searched for three hours,” Hernandez said. Dejected and assuming that the dog had drowned, they eventually gave up and went home. Their relief at the return of their dog is to be expected, but this was a special canine – given as a gift.

“The dog had been given to her before a family member died of cancer,” Hernandez said. “She cried all night.”