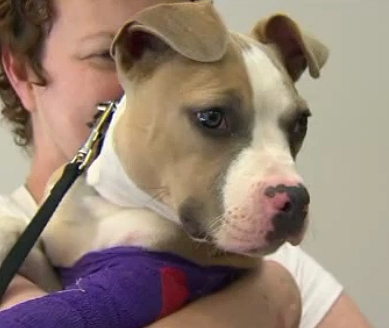 A resilient young dog who survived being thrown from a third floor Chicago balcony has found a new home with the police officer who saved her.

Cowgirl has been recovering at PAWS, the city’s largest no kill shelter, since being thrown into the street in front of her home on May 10. The energetic four month old pit bull mix sustained a broken elbow in the fall, but miraculously, she did not suffer any additional injuries.

The officer who found her, Matt Gozdal, already has a two year old pit bull at home, and when he saw Cowgirl he said he fell for her on the spot. The frightened dog broke him down, and he could not resist her. He and his girlfriend said they will be happy to welcome her home – now they just have to decide on a new name.

22-year-old Jamille Marshall was arrested and charged with one felony count of aggravated cruelty to animals for throwing Cowgirl off the balcony.