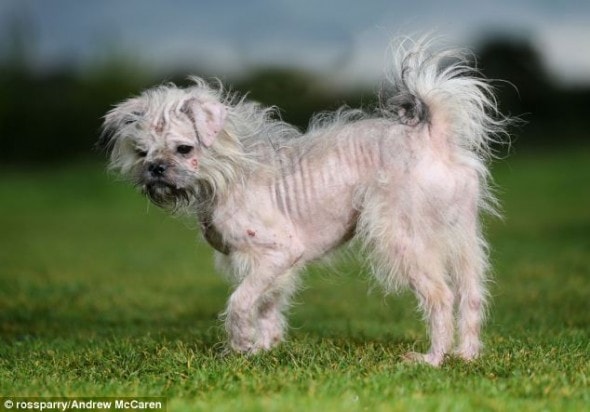 An abandoned dog found in a park was nicknamed ET because of a horrible skin infection that caused him to go completely bald and resemble the movie alien. With proper care ET started to turn around and he now has found the loving home he deserves and is beginning to look less like the alien for which he was named for.

Rescuers believe ET had been surviving on his own for over a month when he was found by a Good Samaritan in a park in Leeds, England. He was brought to Dogs Trust Leeds where they began treating him for his skin irritation which caused most of his hair to fall out.

“When he came to us he was very downbeat,” said Amanda Sands, Dogs Trust Leeds manager. “Because he had little tufts of hair over his body and this really wrinkled skin he did look most peculiar and a bit like a cute alien – hence the name.”

“After about two weeks he started getting better,” said Sands. “It’s amazing how quickly he responded to the treatment.”

As ET’s health improved his demeanor changed too. He soon was a playful, happy dog and ready for his forever home.

When Gerry Gledhill came to the shelter with his wife and two granddaughters he was quickly drawn to ET. At first he could only see ET’s head as he sat in his bed, but as staff came around to feed the dogs ET quickly got up to eat.

“We saw his full body then and were immediately taken by him,” said Gledhill. “It is hard to explain, but it was an instinctive feeling we both just had. We weren’t bothered that he had problems, we just fell in love with him there and then.”

The Gledhills took ET for a walk and knew he was the dog for them. They’ve since renamed him Bobby and are enjoying spoiling their new family member.

“We have had dogs all our lives,” said Glehdill. “We absolutely love them and we always treat our dogs well. He will be spoiled no doubt – like a little prince.”