Military dog and master to be reunited 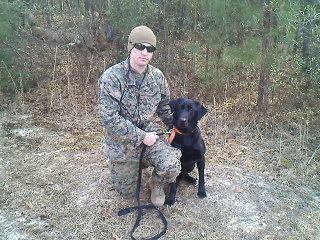 A marine and the dog that saved his life in Afghanistan will be reunited this week after a long search.

Lance Corporal Bradley O’Keefe was WMD Earl’s handler in Afghanistan several years ago. On April 14, 2010 O’Keefe and his battalion were approaching a bridge when Earl saved their lives.

“I told everyone to stop because I noticed that (Earl) was acting like there was something going on,” recalls O’Keefe. “Once he got close enough to (the improvised explosive device) there was an insurgent that pushed a button and kind of blew us up.”

After the explosion Earl ran eight kilometers to O’Keefe’s gear and waited for him, but O’Keefe would never return and the two wouldn’t see each other again. O’Keefe was rushed to a hospital because he sustained serious injuries to his legs. He retired and returned to his home in New York to recover from his injuries. Earl was reassigned and later on he left the military and began a career in law enforcement. O’Keefe never forgot about Earl though.

“He was the one that saved, not just me, but all the other guys that were with me,” said O’Keefe.

Knowing how much Earl meant to O’Keefe, his sister and several of his friends tried to find Earl on and off after O’Keefe returned home.

“We just never got very far,” said O’Keefe’s sister, Rachel Lawson. “It sounds easier than it is.”

They didn’t give up though and this May Lawson set up a Facebook page called “Bring MWD Earl Home.” Within days the Facebook page was producing leads. First someone was able to figure out that Earl’s military number was P-202 and that it would be tattooed on him. That key piece of information helped them find Earl who was now working in Rhode Island with state police.

Earl was an important part of the state police force and was even used in the aftermath of the Boston Marathon bombings. When the call came to the state police about Earl and his connection to O’Keefe the state police left the decision up to Earl’s new handler, Trooper Damien Maddox, about what to do.

“He didn’t hesitate,” said Lt. Colonel Michael Winquist about Maddox’s decision to give Earl to O’Keefe. “He said it was the right thing to do.”

O’Keefe, Lawson and everyone who helped search for Earl are ecstatic about Maddox’s decision and can’t wait for the reunion. ON Friday a ceremony will be head a state police headquarters and O’Keefe and Earl will finally be reunited for the first time since that day on the bridge in Afghanistan.