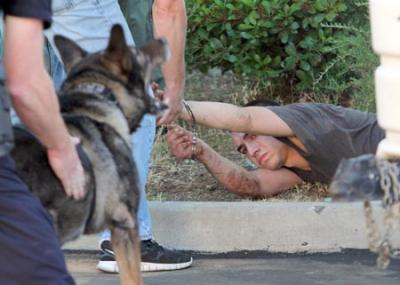 This week a police dog named Ray retired after seven years of service, but not before helping make one last big arrest. The Butte County Sheriff’s Office K9 helped capture a man that was on the sheriff office’s “most wanted” list.

A California Highway Patrol officer pulled a car over Thursday because the driver was using a cellphone while driving. Once pulled over the passenger of the car got out and fled the scene. The passenger turned out to be 23-year-old Chase Forcier who was wanted by police for escaping from jail with a felony offense.

The officer called for backup which included K9 Ray who was able to signal that someone had recently entered a travel-trailer behind a business. Officers yelled to Forcier to come out of the trailer or they would send Ray in after him. Forcier exited the trailer and brought into custody.

It was a big moment for Ray who retired the following day. Ray had served on the police force for seven years and now will enjoy retired life living with his handler.