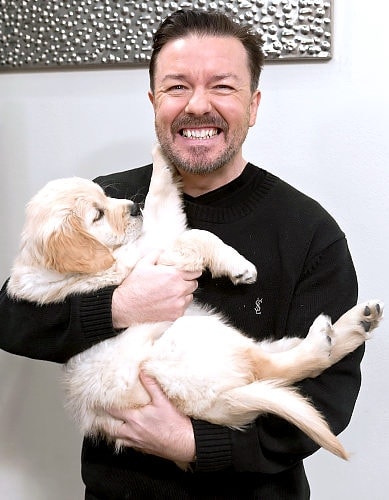 When a fan asked famous comedian Ricky Gervais over Twitter with some help getting a dog Gervais agreed but on one condition, only if the fan agreed to get a rescue dog.

A fan of Gervais and his new television series Derek tweeted Gervais stating, “Having watched #Derek my parents agreed if you retweet this they will buy my sister a dog & let you name it!” Gervais helped the fan out by retweeting but added, “a rescue dog tho” to the end of it.

Gervais went on to tweet several more times about the importance of rescuing dogs. “How can anyone abandon a beautifully loyal dog…It makes me so sad & angry.” He has been a long time animal advocate most recently working with the World Society for the Protection of Animals (WSPA) with their Collars Not Cruelty campaign to protect dogs from both cruelty and rabies.

Gervais, who has over four million followers on twitter, encouraged his fans to help animal shelters even if they can’t adopt. “Pop into an animal rescue centre today. Even if you have no intention of taking a little critter home, get a free cuddle & donate a fiver.”