Have you ever been tempted to drop everything—friends, family, job—and hit the open road with your dog? 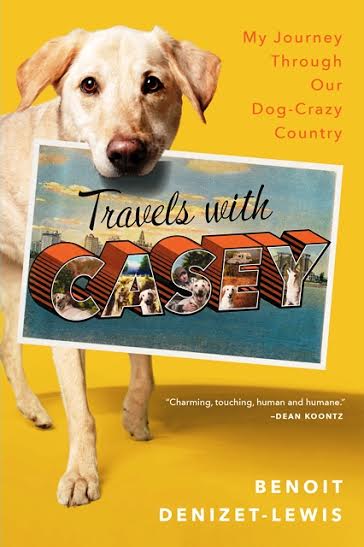 New York Times writer Benoit Denizet-Lewis did exactly that in the spring of 2012, traveling 13,000 miles through 32 states with Casey, his nine-year-old Lab-mix. The end result of that four-month adventure is Travels With Casey, a charming, funny, and fascinating new book about dogs in America.

Denizet-Lewis meets a remarkably diverse group of canines, including therapy dogs, police dogs, stray dogs, Bulldog mascots, dock-jumping dogs, shelter dogs, and “dogs with no discernable job other than lounging around the house and terrorizing the mailman,” he writes. He also hangs out with a great cast of dog-obsessed humans, including dog rescuers, pet psychics, homeless people, and dog trainers.

Travels With Casey is also a very personal book. Denizet-Lewis wants a closer relationship with Casey, since he worries the dog might prefer to live with another human. The hilarious and touching prologue takes place in the office of a therapist who helps the author work through his “dog issues.”

Denizet-Lewis also meets someone special on the trip, adding an unexpected element of romance to a book that is otherwise about dogs and the American open road.

The book is a great summer read, and it’s perfect for anyone who loves dogs, travel, and adventure. The author also surprises us when he meets a stray dog in Arizona, and decides to rescue it, adding another four-legged member to his pack.

Check out www.travelswithcasey.com to get more information about the book and to see pictures and videos from Denizet-Lewis’s journey.

You can purchase the book on Amazon.com.

Travels With Casey, “Rezzy, the stray dog I couldn’t leave behind”