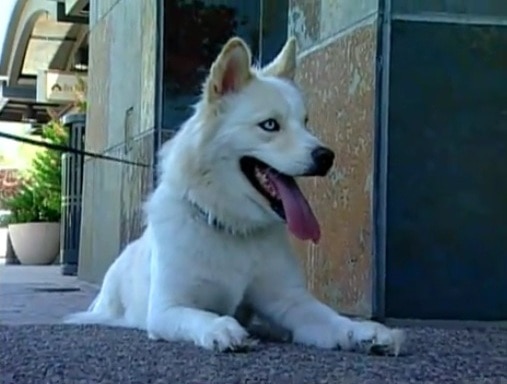 A two year old Samoyed mix watched Jennifer Kenney (of Little Rascals Rescue) pause at his kennel in the Maricopa animal shelter before she turned to move on to another, less adoptable dog. Kenney believed the happy, smiling Rudy would have no problem finding a home, and she prefers to take in the tough cases – the ones much less likely to be chosen. Just before Kenney was out of eyesight, however, Rudy looked at her and stood up…and in doing so found his savior.

Rudy was dropped off at the shelter at the end of 2009. Originally it was thought that we was born with a birth defect, but vets now believe that the stray was eventually forced to chew off the mangled remains of his back legs after being struck by a car. The two legged marvel does a remarkable job of getting around despite his disability – so well, in fact, that he completely rejected a donated wheelchair. Preferring balance to being strapped in, the young dog manages to walk and even jog on all but the most slick surfaces. 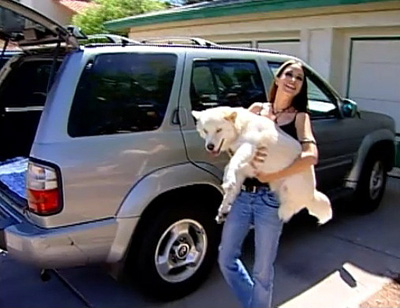 Kenney was so moved by Rudy that she eventually adopted him. While she expects that he may require a little more attention than the average dog, she does believe that his will be a fairly normal existence – as normal as can be for the special, inspirational dog that forever changed his world and the life of one woman for the better – just by standing up for himself.

.
A recent interview with Jennifer Kenney and Rudy on ABC: