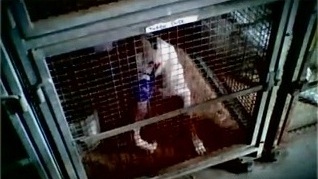 Undercover video shot earlier this year by non-profit animal welfare organization Grey2k has sparked new controversy regarding conditions at Tucson Greyhound Park. In the video, trainers show people who they believe are visitors through the kennels.

“These dogs are kept in total darkness all day long. They are let out a couple of times a day to relieve themselves in groups and then get right back in their cages.,” said Christine Dorchak, founder of Grey2k. “They live in confined cages barely large enough for them to stand up or turn around. Our investigators noted the majority of the dogs were muzzled inside their cages.”

Dorchak filed a formal complaint (pdf) with the Mayor of Tucson, stating: “We are highly concerned about the apparent willingness of Tucson Greyhound Park to condone and in fact, to aid clear violations of the City Code pertaining to animal cruelty and neglect.”

Taylor said, “They saw what they wanted to see.” Taylor feels that Tucson Greyhound Park is one of the best racing facilities in the country. He calls the kennels an ideal place for dogs. When asked if he would keep his own dogs in such conditions Taylor said, “If it was a racing dog yes, if it was a pet no.”

When asked about the distinction, he replied “One has a job and does a job and one doesn’t.” Taylor was also asked if reporters could visit the kennels to see conditions for themselves. His response: “I am not going to let the press in because you are going to show it to thousands of people and we don’t know how they are going to take it. It doesn’t make any sense to do that. I could show you the Taj Mahal and people would say that it is too religious.”