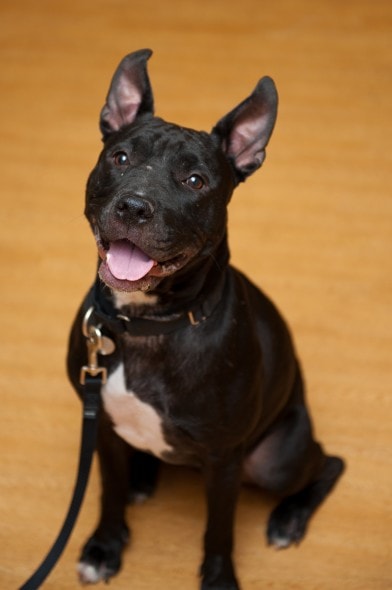 Pit Bulls receive the most discrimination out of any breed, often labeled aggressive or ill-behaved before even being given a chance. Such breed discrimination is usually counterproductive, forcing them to be either euthanized or sold to abusive owners who use them for fighting, therefore making them aggressive and confirming stereotypes.

However, many Pit Bulls are actually sweet natured souls looking for love like any dog. Such was the case with Diamond. Diamond was actually scheduled to be euthanized when her life was spared at the last minute by staff from PAWS Chicago.

Diamond had been given up by her owner and was awaiting her fate at a local shelter in Chicago. When she was rescued by PAWS Chicago, she was almost bald due to a very bad case of mange, a skin condition that should have been easily treatable but clearly was neglected.

Despite Diamond’s condition, her enthusiasm was not dampened. Whenever anyone approached her cage, it would rock with excitement as she wagged her tail and wiggled in happiness. PAWS Chicago’s intake team knew that with medical care and a loving foster home, Diamond could live a long and happy life.

So, Diamond was taken in to PAWS Chicago’s adoption program to begin her long road to recovery. The veterinary team there provided Diamond with much needed medical treatment in order to treat her skin infection, including routine dips and skin tests. Mange takes months to treat, so Diamond was placed in the care of one of PAWS Chicago’s dedicated foster families so that she could heal in the love and comfort of a home.

After several months, Diamond’s beautiful black coat began to grow back and she was ready to begin the search for a forever home. Though it took a few months, Diamond found the perfect couple who fell in love with her and brought her in to be a permanent part of their family.

In all, Diamond was with PAWS Chicago for over a year but it was well worth the wait!

PAWS Chicago is a national model in no-kill animal welfare with a mission to build no-kill communities that respect and value the life of every cat and dog, end the overpopulation of homeless animals, and transform animal welfare by promoting transparency and setting higher standards in the way animals are cared for in shelters. Since their founding in 1997, the number of homeless pets killed in Chicago has dropped by nearly 70%, from 42,561 pets to fewer than 14,000.

In 2013, PAWS Chicago will find new homes for 6,000 pets through its cageless No-Kill Adoption Center and perform more than 18,000 low-cost spay/neuter surgeries in disadvantaged communities through its Lurie Spay/Neuter Clinic and GusMobile Spay/Neuter Van.  PAWS Chicago is also rated in the top 1% of charities in the nation for efficient use of donor funds according to the independent charity evaluator, Charity Navigator.