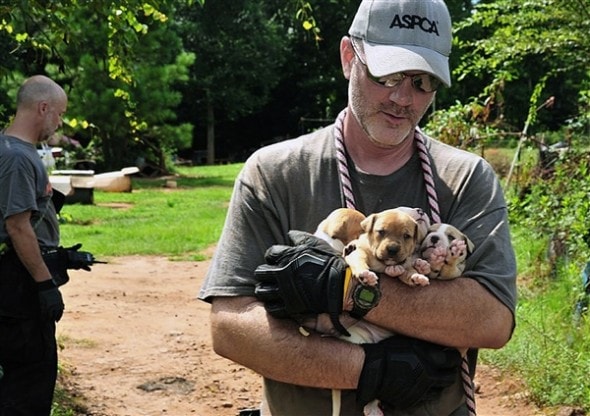 Federal and state officers served search warrant on Friday in Alabama and Georgia. They seized pit bulls from Alabama, Georgia and Mississippi and recovered over $500,000 in cash that is believed to be tied to illegal gambling on dog fights.

The defendants face several charges related to dog fighting and gambling. Each charge carries up to five years in prison. The raids are the result of a three-year investigation involving state, local and federal agencies.

“I believe if Dante were alive today and rewriting the ‘Inferno’ that the lowest places in hell would be reserved for those who commit cruelty to our animals and our children,” U.S. Attorney George Beck said Monday at a news conference announcing the arrests.

Many of the rescued dogs were emaciated and wounded and found chained with no access to food and water. Officials with the ASPCA and Humane Society of the United States are helping to care for the 367 seized dogs at undisclosed locations. The dogs will have to be kept as evidence while the case is in progress.