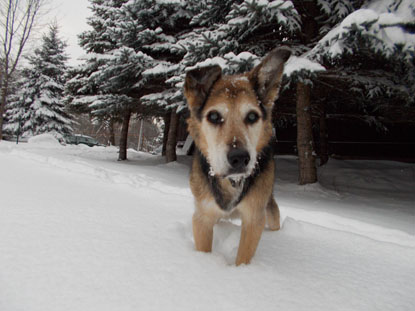 Schoep, the dog that became famous after being photographed sleeping in his devoted owners arms while floating in Lake Superior is doing well and enjoying winter.  Since donations started pouring in to help Schoep’s owner, John Unger, pay for treatment to ease his 19 year old dog’s pain, things have really been looking up.

Schoep is benefiting immensely from laser treatments he’s receiving, as well as pain medication he can now have thanks to the support shown by strangers after they heard his story.  John Unger rescued Schoep 19 years ago, an abandoned and abused puppy who looked forlorn in his kennel, seemingly having given up hope of ever being adopted.  Years later, he would rescue Unger in the same way when Unger contemplated suicide.

“A month ago we did the blood work again, and everything is on the positive,” said Schoep’s perpetually upbeat owner, John Unger, in a recent interview.  Schoep is now able to use his back leg which used to drag, and the blind dog recently climbed a set of stairs which he hadn’t done in a long time.  The winter weather is certainly helping though, as Unger says “He’s always been a winter dog, in the summer, he’s more lethargic. … In the winter, he is absolutely in his element.”

The photo, taken by photographer Hannah Hudson still gets a lot of attention, and she has been asked to travel great distances to photograph people’s pets since then, which has always been her dream.  “I told the universe I wanted to take pictures of dogs for the rest of my life, and this is what happened,” Hudson said.

More than $40,000 has been donated to help Schoep, and so Unger and Hudson started a foundation to help other pets.  “We started Schoep’s Legacy Foundation to work with other shelters to pay back the community both regionally and locally and help place dogs and get them medical procedures and treatments for themselves,” said Hudson.

The story of what John Unger did for his beloved dog will always be an inspiration and his legacy will live on for many years to come. 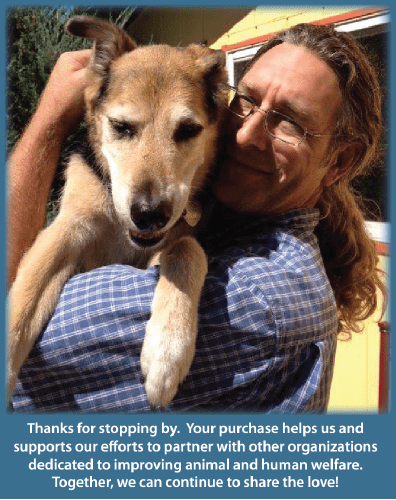 4 thoughts on “Schoep: Still going strong thanks to support from everywhere”