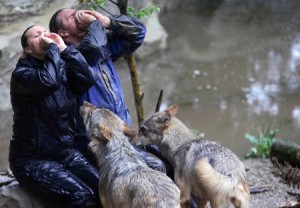 Star of “The Wolfman” and “Mr & Mrs Wolf”, Shaun Ellis has an exceptional bond with dogs and wolves, and his passion to understand these remarkable animals has compelled him not only to fully integrate with captive wolf packs but also to be accepted by and live amongst a totally wild wolf pack. In a recent interview with the Guardian, Ellis describes the experience, and if you get the distinct impression that this is not your average dog lover, you are not alone.

Like most young children, I grew up with an innate fear of wolves. It wasn’t until I was a bit older and saw a wolf in a zoo that I realised how far away this animal was from the mythological creature I’d learned about in books and films.

I grew up in a small village in Norfolk and was always interested in the natural world and wild animals. I knew I wanted to work with them in some way when I was older. In my 20s, I read about an American naturalist, Levi Holt, who ran a wolf research centre in Idaho and I thought, “That’s where I want to go.” I sold everything I had and raised enough money for my plane fare. When I met up with biologists working on the reservation, they took me on as a basic field biologist, teaching me how to track wolves and collect data for them.

Even though the other biologists and scientists thought it was dangerous, I soon wanted to get closer to the wolves really to understand their behaviour. I couldn’t help wondering, “Could a human become part of their family?” If I could, I thought, imagine what information I could share.

After a year or two of working for the centre and getting to know the area – a rugged, mountainous landscape covered in forest – I moved to the wild. The first time I got up close to a wolf, within around 30 metres, any fear I had quickly turned to respect. I stayed in a den area, a remote spot where wolves look after their young, and very soon one pack began to trust me. I lived with them day and night, and from the start they accepted me into their group. I ate what they ate, mostly raw deer and elk, which they would often bring back for me, or fruit and berries. I never fell ill and my body adapted quickly to its new diet. It’s easy to look back and think, “What horrible food”, but when you haven’t eaten for a week, it looks appetising.

I couldn’t hunt, but I soon became useful looking after the younger ones. I would spend days sitting outside the den, observing their behaviour and trying to make sure they kept out of danger. 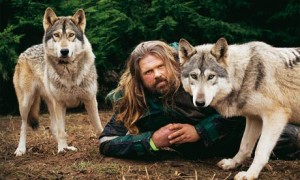 I stayed with the same pack for over a year, watching pups grow to adulthood. I never missed human contact during that time.

I felt a tremendous sense of belonging with the wolves. Whenever I began to think about my old life, I would quickly switch my thoughts back; in terms of survival, I had constantly to focus on my new habitat. Although I didn’t see anyone, there were people back at the reservation and I had a rendezvous point where I could leave messages if I felt I was in danger. I was only ever truly scared on two occasions: once, when all the wolves were feeding, I ate the wrong piece of meat – there is a strict hierarchy of who eats what part of an animal – and one of the wolves leapt on me in seconds because of my mistake. He took my entire face in his mouth and started to squeeze hard. I could feel the bones in my jaw begin to bend, and in that split-second I realised how vulnerable I was and how restrained they were most of the time.

The other time, I wanted to get a drink from the stream and one of the wolves stopped me dead in my tracks, growling, snarling and nipping me. I thought, “This is the end, he’s going to finish me off.” An hour or so later, he started to lick my face and we both went to the stream for a drink. There I saw evidence of recent bear tracks and droppings, and I realised this was why he guarded me. I would almost certainly have been killed but, more importantly, my tracks would have led back to their young, so it was for their protection.

Eventually I had to leave; I had lost so much weight and looked gaunt and worn after a year. Life expectancy in that sort of environment was short and I felt it was time to come back to society. Returning to the world was a tremendous culture shock, but I knew I could do a lot with the knowledge I’d acquired. I now run a centre in Devon that helps wild and captive wolves, and offers educational courses. I want to show people that wolves aren’t savage and ruthless – they are balanced and trustworthy creatures that place their family above all else.