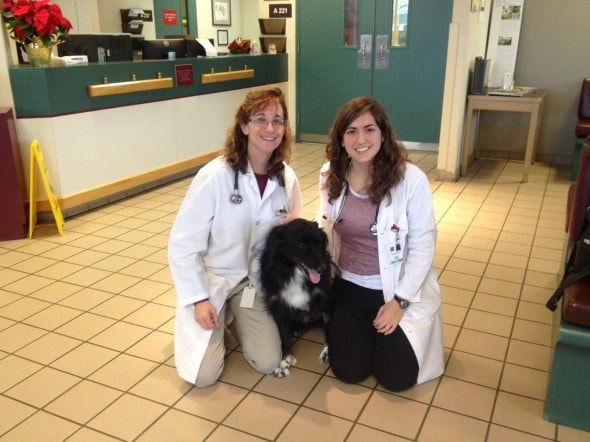 Bailey, a shelter dog in Missouri, successfully underwent surgery last month to repair a hole in his heart. His surgery was the first successful one of its kind.

Bailey is a six-year-old border collie. A coronary aneurysmal rupture he suffered earlier in life created a hole in his heart. Bailey was lucky to survive, but he beat the odds. In 2011 Bailey underwent surgery to try to repair the hole, but it was unsuccessful.

On December 5h Bailey underwent a second surgery at the University of Missouri-Columbia Veterinary Teaching Hospital. Dr. Deborah Fine performed the surgery, which was the first of its kind. Using a deviced called an Amplatz canine duct occlude Dr. Fine successfully repaired the hole in Bailey’s heart.

“According to Dr. Fine, this is the very first time in the nation where such a device was successfully implanted in an aortic-right atrial fistula,” said Kim Todd, Bailey’s foster mom.

The surgery was paid for with the help of donations, and they are continuing to accept donations to help with Bailey’s post-operative care. Donations can be made to the New Nodaway Humane Society Shelter.

Now Dr. Fine is waiting for scar tissue to grow over the device so it will not dislodge. Bailey will go in for a follow-up appointment in March where he will hopefully be given the all clear. If so he will be able to gradually come off the various medications he has had to take to prevent heart failure. Most importantly Bailey’s chance for a long healthy life will improve greatly.

Bailey’s surgery isn’t only benefitting him though. The groundbreaking surgery will provide helpful information for other cardiology cases, both in other dogs and humans.