Addy, the sister of Sammy the cocker spaniel who was badly abused by his owners, is safe with Monmouth County Society for the Prevention of Cruelty to Animals’ Eatontown branch.  After investigators discovered that Sammy’s owners, Keith and Shauna Morgan had another dog in their home, the Morgan’s agreed to surrender her. 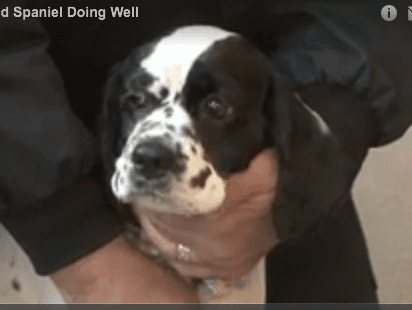 Interestingly  3 year old Addy seems to be in good health while her brother was near death when the Morgan’s dropped him off claiming that he found him at the side of the road.  The SPCA received an anonymous tip about Addy, and worked to verify that it was true before proceeding.  “We had to build a case and make sure we weren’t going over there unfounded,” said Chief Victor “Buddy” Amato of the MCSPCA.   “And plus we didn’t want to go in there right away…we were afraid they might do something else with the dog.”

The Morgan’s voluntarily surrendered Addy when asked about her, and will not face additional charges as she was found to be in good health.  “In this case they did the right thing, with this dog,” said Amato. “Now we have it. It’s not going to have any kind of bad fate, and maybe we can work on getting it a home.”  At this point it is a mystery why the dogs were treated so differently but at least they are both safe, though it was evident that Addy was freshly groomed when she was picked up.  “They had groomed it. Who groomed it we don’t know, but someone had her groomed prior to us getting there. They must have known,” said Amato, showing Addy’s shaved fur and freshly cut nails. 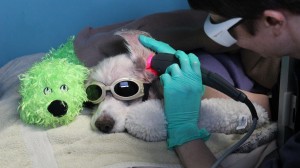 Sammy continues to improve, though it is going to be a long, slow process.  “That dog is going to take at least couple of months before it’s out of the woods though, and before it’s even ready for any type of adoption,” said Amato, adding Sammy can stand up for short periods of time.  He is now having cold laser therapy which helps ease discomfort caused by inflammation in his ears and promote healing, according to information on the Red Bank Veterinary Hospital website.