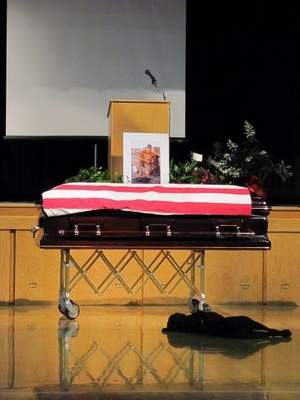 A  photograph of a labrador retriever guarding the body of his master, a fallen Navy Seal, has inspired the popular TV show NCIS to devote an episode to honouring Military Working Dogs.  The original photograph depicted a black lab, named Hawkeye, lying forlornly at the foot of his master’s casket.  Navy Seal Jon Tumilson was killed in Afghanistan in 2011 when the helicopter he was in crashed, killing all 30 people on board.

The photograph, taken by Tumilson’s cousin Lisa Pembleton at the funeral which was attended by 1500 people prompted comments from around the world about the loyalty, bravery, and companionship depicted in the picture.  The directors of the popular show NCIS decided to do an episode dedicated to “military working dogs and their brave handlers everywhere.”

The storyline in the show follows a soldier and his dog as they save the life of a young boy from a land mine.  As the soldier brings the boy safely home he is shot by a sniper and killed.  In the show, just as at Tumilson’s funeral, the dog lies at the side of his fallen master.  The episode, which won the ratings competition for that night, doubling it’s closest competitor, highlights the role of dogs in the military.  At one point the leading man, Jethro Gibbs, even says of the dog “He’s not a dog. He’s a Marine.”

Tumilson’s family will be dedicating a statue of the Seal and his dog Hawkeye at Fossil and Prairie Park in Rockford this summer.  “We will be unveiling a life-size bronze statue of Jon and Hawkeye this summer in his hometown, and would like to personally invite Mark Harmon (who plays Gibbs), and any of your cast members, to come and celebrate that special event with us,” Tumilson’s brother-in-law, Scott McMeekan, wrote on the “NCIS” blog.