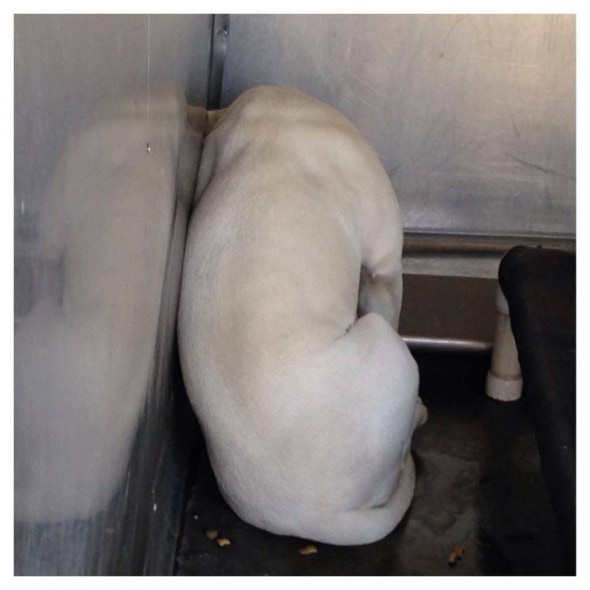 Chelsea, a one-year-old pit bull, was so scared and depressed at a shelter in San Bernardino, California that she wouldn’t even turn around to look at potential adopters. Her future was looking bleak as no one wanted to adopt her and she was due to be put down later this week. Then Save SBC Shelter Pups posted about her on their Facebook page. Now hundreds of people are offering her a home.

San Bernardino City Animal Control was struggling to help Chelsea. She was so depressed that when potential adopters would come around to look at her she wouldn’t even turn around, instead cowering in the corner of her kennel.

According to a potential adopter Chelsea also has some behavioral issues.

“They let me know that the dog had lashed out and tried to bite some of the people at the shelter,” said one potential adopter.

Chelsea was scheduled to be put down this coming Thursday and without the help of Save SBC Shelter Pups that very well would have been her fate. The posted a picture of Chelsea explaining her story to their Facebook page. It was shared over 9,000 times.

Now hundreds of people have contacted the shelter wanting to offer Chelsea a home. She will be available for adoption starting February 13th where one of the hundreds of willing families will be giving her the home she deserves.

Save SBC Shelter Pups is thankful to its community for helping to save Chelsea and hopes now the focus will shift to the many other dogs they are trying to save.