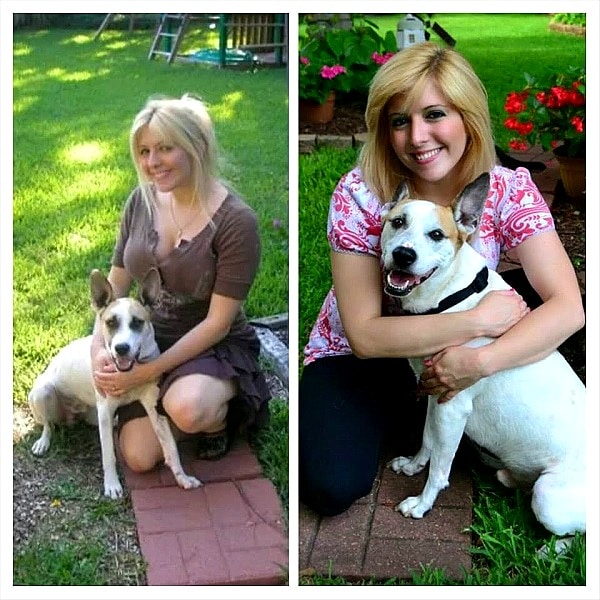 From The Animal Rescue Site:

August 28th, 2006 – I can still faultlessly recall the day that changed my life. I had just turned 17. It was a hot summer night spent with family, when a mutt suddenly peered his head into the front door window of my home. It was by chance that I had noticed it, but I immediately rushed outside.

All I had ever wanted was a dog of my own. I had two dogs in the past, but we ended up having to give them away. My mom and stepdad said absolutely not, as we already had a small poodle, but they gave in when they saw how adamant and in love I was.

The vet suspected he was abused, as I learned he had a very skittish manner when people were holding blunt objects, and showed distrust towards men. From there on out, we became inseparable. He was my best friend and soul mate. I went through a rough time in my teen years, and he was always there with a lick and cuddles to comfort me. He never left my side.

My family also took notice to his protection over me. They often joke that he is just fine only as long as I am around, and only cares about being with me. I never felt scared to go anywhere at night when he was with me, or to live alone in my first apartment. We kept each other safe. I’ve never been this close with any animal, and I am so blessed to have found him. Some may say I rescued him; but he absolutely rescued me. I guess it’s safe to say that we rescued each other.

Ariana
Houston, TX
The Animal Rescue Site sells lots of animal-themed merchandise and pet products, and for every item they sell – be it a shirt, sneakers, purse, coffee mug, Kong toy – food is donated to shelter animals.