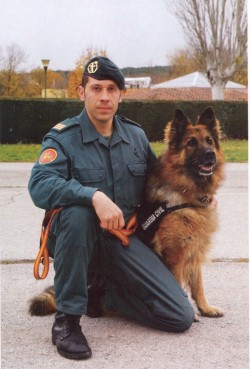 A Spanish police dog has been honored with a prestigious award by a British animal charity for his bravery and skill.

Ajax worked with the Spanish Guardia Civil bomb squad and in July of 2009 he heroically detected a bomb only hours after two officers were killed in a terror attack. The attack occurred on July 30th, 2009 on the Spanish island of Mallorca. Ajax and his handler, Sgt. Juan Carlos Alabarces, were there as part of a Royal detail to search the island prior to the arrival of the King of Spain.

A car bomb exploded killing two officers. The armed Basque group ETA claimed responsibility for the attack. Ajax and his handler responded to the scene and Ajax located a second bomb that was armed with a motion sensor and would’ve potentially killed anyone in the area. The bomb had been attached to the underside of a vehicle that was parked on a public road and located close to several hotels. A controlled explosion was performed and the blast sent shrapnel over 100 yards.

“The bomb had been planted with the sole intention of killing more Civil Guard personnel,” said Sgt. Alabarces. “If Ajax had touched any part of the bomb, he would have activated its motion sensor and been killed along with myself and everyone else within range of the bomb.”

For his life-saving efforts Ajax was awarded the People’s Dispensary for Sick Animals’ Gold Medal in Madrid today. He is the 22nd dog to receive this award which is the highest honor for outstanding animal bravery and exceptional dedication in civilian life. It is considered the animal equivalent of the UK’s George Cross.

For more information about the PDSA Gold Medal and its previous recipients go to www.pdsa.org.uk/goldmedal