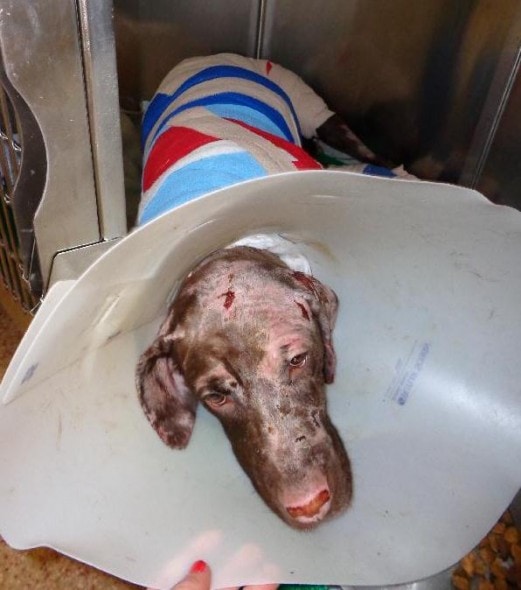 A three-year-old Labrador retriever named Rosci escaped a fire earlier this month in Buffalo, New York. However, the burns Rosci suffered have led to expensive care and now her owner can no longer afford it. Her owner has surrendered SPCA Serving Erie County and they are now asking for help to care for her.

Rosci’s burns were so severe that her treatment was costing her owner thousands of dollars. When her owner could no longer afford the financial burden Rosci was surrendered to the SPCA Serving Erie County last Wednesday.

“The dog was literally covered in open wounds,” said Gina M. Browning, director of public relations for the Erie County SPCA. “Quite frankly, we didn’t know if she would make it through the weekend.”

Rosci has pulled through though and is showing sings of improvement, but she has a long way to go. Her treatment will likely cost thousands of dollars and the SPCA is hoping animal lovers with donate to help get Rosci the care she needs. The SPCA is committed to helping Rosci as long as her condition continues to improve.

“We have to give this dog a chance when it looked like she had the will to survive,” said Browning.