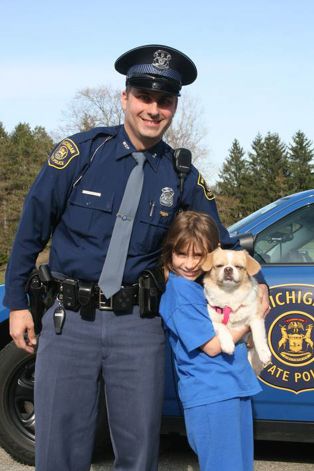 Michigan State Trooper Randy Gariglio is a hero to 9 year old Lindsey Hamm today after she found and rescued her missing dog.  Diva had been missing since Sunday evening when the wind blew open the door to the family home while everyone was out.  Both Diva and their other dog Milo, a jack russell terrier, were missing but Milo turned up 2 houses away.  Rachelle Hamm, who is Lindsey’s mom said, “When they were not together, we were really concerned.”

They searched until 10:00 pm but did not find the little dog and gave up for the night, all 3 of them going home in tears.  The next day they continued the effort as Lindsey went to school.  “I cried a lot,” Lindsey said. “I went to school, but I couldn’t really concentrate, because I was concerned about my dog.”

Gariglio spotted the Pekingese Corgi mix on Monday morning as he drove down a busy street in Ionia where he has worked all of his 14 years on the force.  “A car had just gone by this small dog, and I was worried about it getting hit. She seemed scared and lost,” said Gariglio.  Concerned for her safety, he stopped and she ran under his car.  After gently coaxing her out he put her inside the vehicle where she immediately made herself comfortable and looked out the window as they headed toward the local animal shelter.

Fortunately the shelter knew immediately who the dog was as the Hamm’s had alerted them to her disappearance, as well as making posts on Facebook.  When Rachelle got the call from the shelter she went straight away to pick up their baby and took her to Lindsey’s school to surprise her with the good news.  Diva was basically okay though she had some puncture wounds and a burst blood vessel in her eye from being attacked by an unknown predator.

Lindsey and her family are very grateful to Gariglio for saving Diva’s life and helping to reunite the family and everyone had a better night of sleep last night.