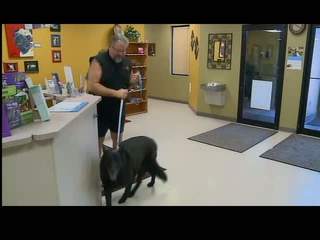 Thanks to innovation and modern science, 2 healthy dogs in Wisconsin have been given a new lease on life.  Shadow, only 5 years old had hip dysplasia, and DeNiro, a 10 year old german shepherd, suffered from arthritis which severely limited both dogs mobility.  Going for a walk was a real chore until recently, when they were benefactors of a new stem cell treatment for dogs.

Packerland Veterinary Clinic is the first facility in the state to offer the therapy, and the dogs owners are grateful. “She was slowing herself down, she truly was. She was reserving herself. She’d run a little bit, then she’d sit,” said Luther Kortbein, Shadow’s owner.

The procedure involves taking stem cells from the animal, and injecting their own cells right back in near the affected joints after being separated and purified.  “Stem cells are cells that don’t know what they want to be when they grow up. We can harvest that power and put them places and make new tissue,” said Dr. Maura Mansfield, veterinarian.

While there are some who feel that is a step too far in the treatment of animals, due to it’s cost and the nature of the science, it gives hope to dog owners and people everywhere. “This is just the tip of the iceberg. Pretty soon I think we will be able to use this to regenerate more than just part of a tendon,” said Mansfield.  The stem cell transplant costs $1800 to $2000  but both owners agree that it was money well spent as it has completely altered the quality of life of their beloved pets.  “He loves going up to the lake and running and jumping now he can do that again,” said DeNiro’s owner, Keith Noskowiak.

There is hope of course, that this procedure will eventually be used to treat people, however at this time it is still considered to be in the research and development stage.  Shadow and DeNiro don’t seem to mind testing the theory though, as they once again run and jump like young pups.