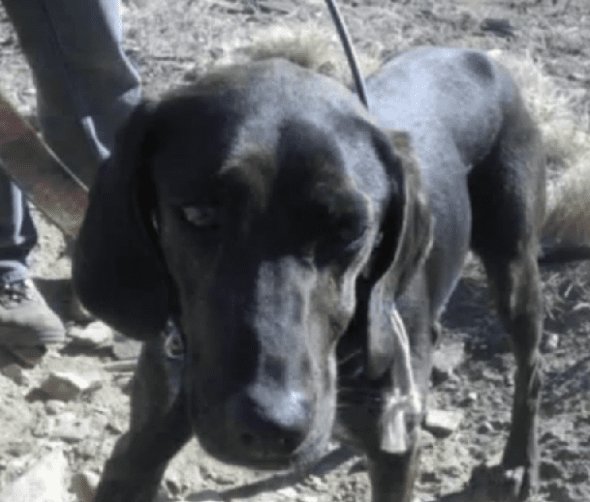 When King and his friend found Kia she was in bad shape. “She was exhausted, she needed water, she needed food. She needed all sorts of stuff. She didn’t want to do anything,” said King. “Every time we tried to get her to go, she would lay down and looked like she was ready to die. I couldn’t let that happen.” So for 3-and-a-half miles King and his friend took turns carrying her down the trail.

When they reached the bottom then took Kia to a park ranger who took her to a local shelter. Kia had no tags or a microchip. The park ranger believes she was probably used to track mountain lions.

King wasn’t able to take Kia himself so he started getting the word about her to friends and family, hoping one of them would adopt her. He posted her picture and story on Facebook. Not long after one of King’s friends, Curtis Pittman, came forward to adopt Kia.

Kia is adjusting to her new life in Pittman’s home. “We’re going to keep watching her and give her a high protein diet, put some weight back on her,” said Pittman. “She’ll be inside on the couch, living the high life I guess.” Both Pittman and King are committed to giving Kia a better life. “She’ll probably be spoiled a little, not gonna lie,” said King.