The holiday weekend got off to a beautiful start for a trapped dog rescued from an island off the coast of South Carolina.

After a two day search, animal rescuers from Pet Helpers were able to capture the emaciated dog. Charleston County Animal Control and Pet Helpers had received calls about sightings of a starved pit bull mysteriously stranded on the small island, and an initial search was conducted Thursday, but no sign of the dog was found.

When the rescue team returned Friday they saw the dog but could not approach it. A human trap was set up, but the frightened animal would not approach it. That’s when Pet Helpers staff member Jason Moore decided to spend the night on the island. When the sun rose the next morning he had the dog, who he described as “very skinny, friendly and hungry.” 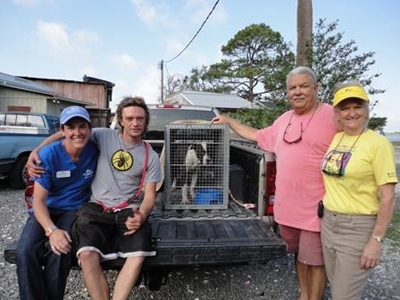 ‘Gilligan’ is now in the care of Pet Helpers, who estimates that he was without food and water for many weeks. He is expected to make a full recovery.
.