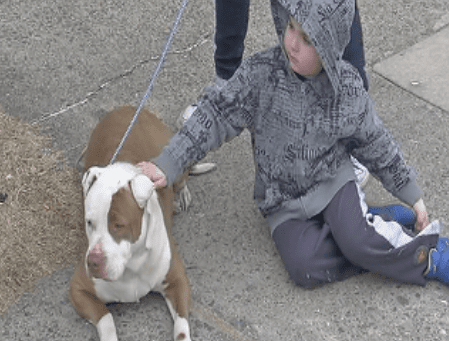 A group of teenagers came to the rescue of a dog thrown from a car in Upper Darby, Pennsylvania.

Mohanad Abozaid and some friends saw the pit bull mix get thrown from a car that then sped off on Saturday night. The dogs quickly came to her aid. The dog followed Abozaid home and using what money they had they bought her a leash, dog bowls and some food.

Abozaid’s religious customs don’t permit him to touch dogs, but he made the decision to help her anyways.

“It’s against my religion to touch them or anything like that, but I’m not going to let a dog die because of something like that.”

The dog, which has been named Queenie, is now being cared for by Cheryl Rosenthal, who is upset by the way Queenie has been treated.

Rosenthal is unable to keep Queenie permanently but is looking for a good home for her.

A police report has been filed, but there are no leads on those responsible for treating Queenie so horribly.

1 thought on “Strangers Come Rescue Dog Tossed from a Car”