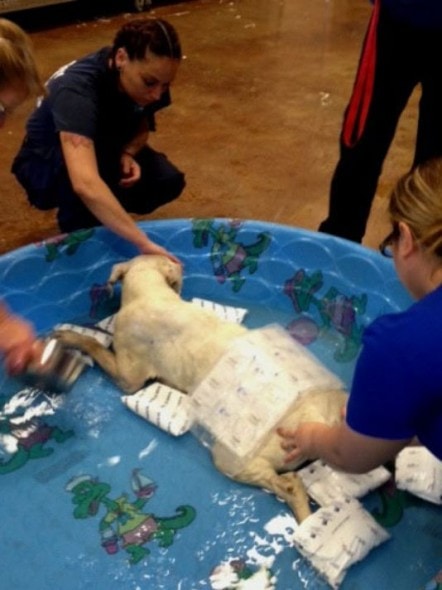 A male, 5-year-old boxer/bulldog mix in Indio was rushed to the Coachella Valley Animal Campus this past Tuesday with an internal temperature of 108 degrees.

Veterinarians put him in a plastic kiddie pool to try to cool him down. The pool had been filled not just with cool water, but ice packs were used as well according to John Welsh. Welsh is the spokes person for Riverside County Animal Services.

“He was panting and very lethargic and could barely stand up,” said Priscilla Dewing, a vet tech that was working to bring the poor dogs body temperature down.

Once in the cool water of the kiddie pool, he was also administered IV fluids and had alcohol pads on his paws. They were prepared to do anything to save him. Slowly but surely, his temperature came down to 99.5 degrees.

The process took place over about 45 minutes. Extreme fluctuation of body temperature is very dangerous, so they had to take it slow. A normal temperature for a dog is right around 100 to 101 degrees.

“It was very touch and go for a few minutes there,” Deputy Director Frank Corvino said in a press0 release. “We’re optimistic the dog will be OK.”

A good Samaritan had called 911 when they had seen the dog in the condition it was in. Animal control officers Jason Salazar and Kyle Stephens responded to that call, and found the dog in an empty field along Avenue 44 and Oasis Street.

“The dog looked very dehydrated, but he was also very shy and wouldn’t let us near him,” Stephens said in a news release. “But Officer Salazar was able to cut him off at Avenue 45 and Market Street.”

The two animal control officers started the cooling down process immediately while rushing the dog to the animal campus.