Two boys were out for a walk, exploring their neighborhood, when they saw an old sign lying on the ground.  They found that it was being used to cover a storm drain, inside of which was a starving pit bull that had been maliciously left to die.  But thanks to these guys, Mars is now safe and recovering.

Tyler Price and his cousin Eugene were ambling through an unkempt lot in Flint, Michigan when they saw a discarded sign on the ground.  They flipped it over to see what it said, and were even more amazed to see what was beneath.

“I lifted it up with my foot and looked. All I could see were his eyes,” Tyler said.  He says his first thought was, “We gotta get him out!”

When the boys were unable to get the dog out, Tyler called his father, George. 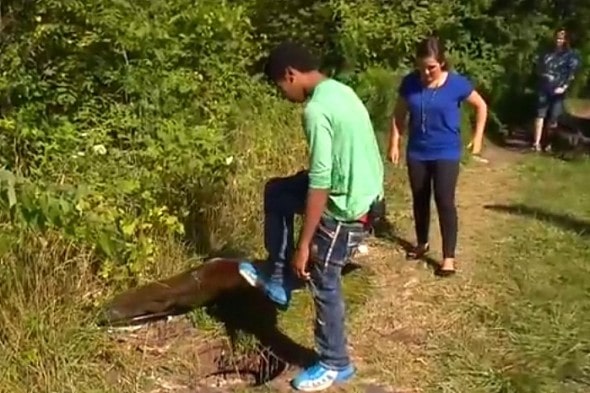 “He immediately said, ‘Dad, take my wallet – can you go to the store and get the dog some dog food and water?’”

While they waited for animal rescue group, Streethearts, to arrive, they lowered food down, which he happily gobbled up.  The rescue group was able to get a rope around the dog and pull him up.

But all the dog – called Mars – had for people was love.

“You can’t get near him without getting kissed!” said Terissa Kerr.

When his story was posted online, Terissa knew she needed to help.

“I just saw his little face and something called to me,” she explained. 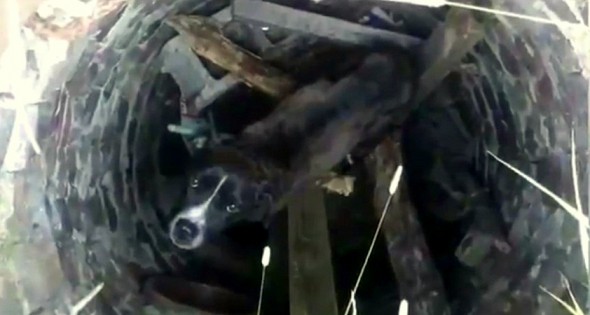 Though Mars, who only weighs half of what he should, is recovering quickly it boggles Terissa’s mind how anyone could starve, abuse, and abandon an animal like this.

“My mind cannot comprehend why someone would want to do something like this – especially to him!  He’s amazing…. Thank God Tyler came along.”

Mars will spend the next year rehabilitating with Terissa.  Perhaps he will stay longer.  Tyler doesn’t currently have a dog, but after this rescue, his family is considering adopting one.

“He’s been on me since Sunday about getting a dog, so we’ll get one that’s rescued.  He deserves it,” George said.

It was discovered at the vet that Mars has a severe heartworm infestation.  He may not survive the treatment, but a fundraiser has been set up to give him the best chance.  If you would like to donate, please click here. 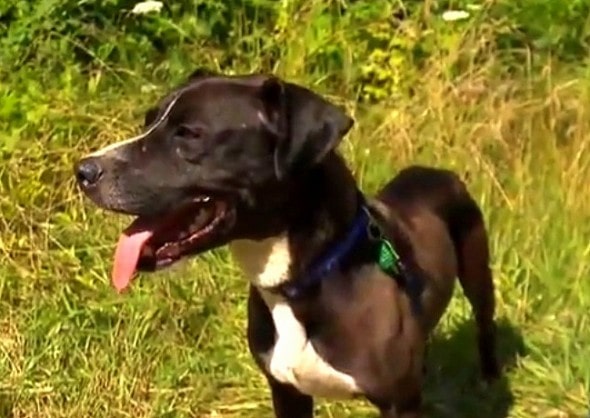 191 thoughts on “Teens Save Starving Pit Bull Thrown in Sewer”